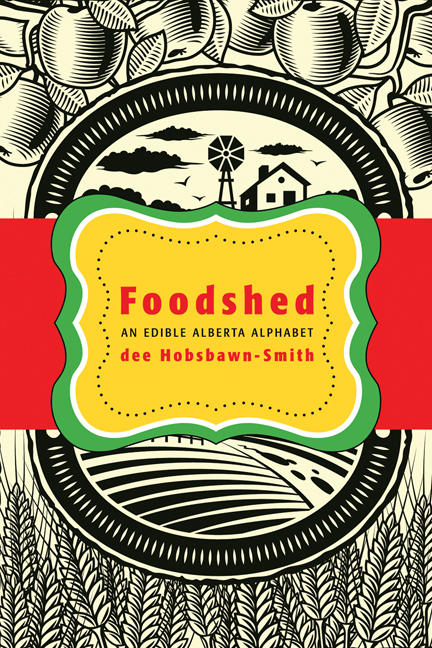 In this intimate guide to Alberta's sustainable food scene, writer, poet, professional chef, and food advocate Dee Hobsbawn-Smith profiles more than seventy-five of the province's growers and producers. Learn the A to Z's of each producer, from Asparagus growers to Zizania cultivators, and enjoy the twenty-six original recipes, one for each type of produce.

The book also examines the ground that farmers stand on: government involvement, sustainability and the environment, animal welfare, farm labour, and organizations from Slow Food to the grassroots Community Supported Agriculture (CSA) movement.

An (agri)cultural examination of modern farming that offers a clear look at current government policies and sustainable growers' best practices, Foodshed sets forth some of the issues that modern farmers face, as seen by the growers themselves.

dee Hobsbawn-Smith's award-winning poetry, essays, and short fiction has appeared in publications in Canada, the USA, Scotland and elsewhere. She earned her MFA in Writing and her MA in English Lit at the University of Saskatchewan in Saskatoon, SK. Her debut poetry collection, Wildness Rushing In, was published in 2014, and was a finalist for Book of the Year and Best Poetry Collection at the Saskatchewan Book Awards. What Can't Be Undone: Stories was published in 2015. She's a local foods advocate, has been active in Slow Food for more than fifteen years, and written a stack of books about food, including Foodshed: An Edible Alberta Alphabet. In her spare time, dee quilts, and has taken up crafting hand-bound chapbooks under her imprint, Dogpatch Press. She served as the 35th Writer in Residence at Saskatoon Public Library in 2015. Bread & Water: Essays was published in Fall 2021. dee lives in Saskatoon.

In [Foodshed], along with the main dish of stories aligned with each letter of the alphabet, [Hobsbawn-Smith] has seasoned the offering with 26 original recipes. She also serves up well-researched explanations of current food issues and trends, and still manages to keep the whole meal appetizing enough that we'll want to go out and reap the bounty of her creative A-Z harvest. —Calgary Herald

While the stories are about Alberta growers and producers, their stories are relevant to anyone interested in sustainable eating. Foodshed is sure to take you on a journey beyond your local farmers market and into the heart of local living. —Savour Life Magazine

As an author, an artist, a cook, a thinker . . . dee has created an important treatise on the evolution of culinary Alberta. This is a great book, as free-form and unconventional as the author herself. —Anita Stewart, culinary activist, author, founder of Food Day Canada, and member of the Order of Canada

Dee has known these farmers for a long time. She has nurtured her relationships with them and it shows. Their stories are personal and real . . . But throughout all this, it is the deep connection to the land that stands out. —Culinaire

Foodshed is a rich encyclopedia of facts, farm-gate lore and original recipes. It's also a politically engaging narrative in which Hobsbawn-Smith articulates the challenges and joys faced by small-scale producers in Alberta. —The Globe and Mail

Other titles by dee Hobsbawn-Smith

Every Day We Disappear

What Can't Be Undone