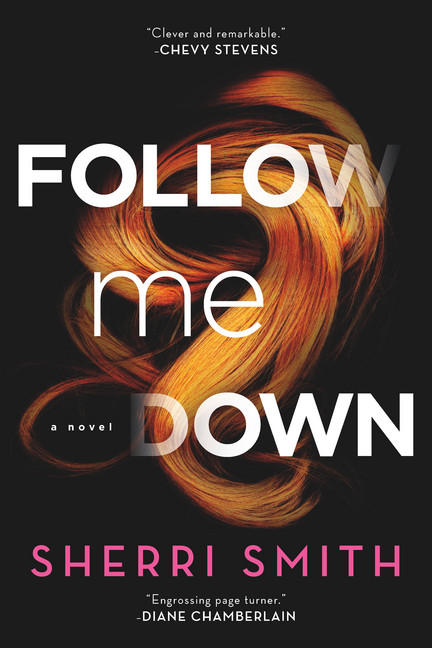 Follow Me Downis a rare find—a gutsy, visceral, and beautifully crafted psychological thriller that Diane Chamberlain called "an engrossing page turner [that] will keep you guessing right up to the delicious ending" from talented new author Sherri Smith.
Mia Haas has built her life far from the North Dakota town where she grew up, but when she receives word that her twin brother is missing, she is forced to return home. Back to the people she left behind, the person she used to be, and the secrets she thought she’d buried.
Once hailed as the golden boy of their town, and now a popular high school teacher, Lucas Haas disappears the same day the body of one of his students is pulled from the river. Trying to wrap her head around the rumors of Lucas’s affair with the teen, and unable to reconcile the media’s portrayal of Lucas as a murderer with her own memories of him, Mia is desperate to find another suspect.
All the while, she wonders: If he’s innocent, why did he run?
As Mia reevaluates their difficult, shared history and launches her own investigation into the grisly murder, she uncovers secrets that could exonerate Lucas—or seal his fate. In a small town where everyone’s lives are intertwined, Mia must confront her own demons if she wants to get out alive.

When not writing SHERRI SMITH spends time with her family and two rescue dogs, and restores vintage furniture that would otherwise be destined for the dump. She lives in Winnipeg, Canada, where the long, cold winters nurture her dark side. She is the author of Follow Me Down and The Retreat.

“No one can be trusted as the flawed but sympathetic protagonist struggles to find her missing twin brother.This engrossing page turner will keep you guessing right up to the delicious ending.”—New York Times bestselling authorDiane Chamberlain
"Follow Me Down is a clever and remarkable novel about one woman’s desperate search for her twin brother thatpulled me in from the very first page, then kept me engrossed all the way to the end with a dark and twisty plot and a town that’s a living breathing character of its own."—New York Times bestselling authorChevy Stevens
“Whip smart exploration of how well we know anyone in our lives, even a twin brother. The plot was engrossing, Mia was compelling, and the small town made the hair on the back of my neck stand up.You'll flip the pages long into the night to find out what happened to Lucas, but you'll never guess the explosive ending!”—Kate Moretti,New York Times bestselling author ofThe Vanishing Year
“InFollow Me Down, that is exactly what the reader does: follow hard-nosed Mia down the dark and twisted path left by her twin brother when he goes missing after one of his students is found dead.The writing is evocative and I turned the pages swiftly to get to the final twist and resolve, which I did not see coming.With confident writing and compellingly flawed characters, this novel is sure to delight readers who enjoy tautly told thrillers.”—Catherine McKenzie, international bestselling author ofHiddenandFractured
“Instantlyaddictive and darkly compelling,Follow Me Down is a spectacular suspense.Sherri Smith is a bold, brave talent.”—Hilary Davidson, Anthony Award-winning author ofBlood Always Tells
“At the start of Smith’s compelling first novel, John Pruden, the police chief of Wayoata, N.Dak., phones Mia Hass, a Chicago-based pharmacist with a dependence on pills, to ask whether she’s heard recently from her twin brother, Lucas. Pruden, who says he’s missing, urges Mia to return to Wayoata, her hometown, where she learns that Lucas, a high school teacher, has become the prime suspect in the murder of one of his students. The town residents are all against him, and the inept local police are all too willing to treat the faintest circumstantial evidence as if it were solid proof in what they consider an open-and-shut case ... in this unsettling crime thriller.”—Publishers Weekly

Other titles by Sherri Smith

A Novel of Suspense