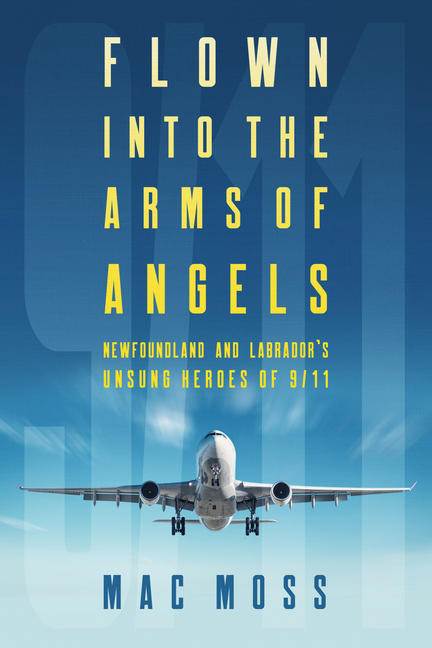 This book is about Newfoundland and Labrador’s response following 9/11. For the first time, Mac Moss tells the stories of people across the entire province—from Stephenville to Gander, to Goose Bay and St. John's—who pitched in and helped approximately 13,000 stranded passengers in 2001 after terrorist attacks in the United States changed the world forever. He has interviewed municipal and service organization leaders of that time, former airport personnel, members of the RCMP and Canadian Red Cross, educators, clergy, and many others who volunteered to give the passengers shelter, food, laundry, and love. This book captures true accounts that, until now, have never been told. Read about professionalism, dedication, laughter, caring, and grief as told by those who made this remarkable story happen. All of these individuals are heroes who have not yet been recognized. This is their story.

"Let us say that all the folks of Newfoundland made at least 204 ambassadors out of all of us on US Airways Flight 27. We love all of you, and we will come up for more of your home-cooked love and affection.” ~ Justin and Christyl B., Pittsburgh

"The Lord took care of us throughout the entire journey. He brought us to one of the most beautiful places on earth, and He provided ‘angels’ to take care of us.” ~ Amy and Chris Prideaux, passengers hosted in St. John’s

“We had nothing, and they gave us everything!” ~ John Chips, passenger on US Air Flight 741

“They are the gold standard of humanity.” ~ David Korpan

As a former administrator of the College of the North Atlantic, Gander campus, Mac Moss and his staff were responsible for 438 of the 6,700 passengers who landed in the Central Newfoundland community when a terrorist attack forced the closure of American airspace and brought 38 planes to Gander International Airport.In Flown into the Arms of Angels, he tells the story of hundreds of volunteers. He interviewed municipal and service organization leaders of that time, former airport personnel, members of the RCMP, military, and the Canadian Red Cross, educators, clergy, and many more volunteers at the 80 or more places that provided the stranded passengers with shelter, food, laundry, and love. This book is about professionalism, dedication, grief, caring, and laughter, as told by the people who made this remarkable story happen.Mac Moss was born and raised in Eastport and has authored several books on the Moss family history of Newfoundland and Labrador. One thing he discovered was that the roots of volunteering and community service run deep in his family tree. Mac graduated from Holy Cross Central High School in Eastport in 1962. He graduated from the College of Trades and Technology (St. John’s) in 1964 with an electrical construction certificate and worked in the mining industry for 17 years. He obtained a diploma of vocational education from Memorial University in 1986, a degree in the same in 1988, and a master’s degree in adult education from the University of New Brunswick in 1995.Mac has devoted more than 55 years to volunteering for the Anglican Church. At the age of 26, he was appointed to the board of the Local Improvement District of Wabush, and six years later he became chair of that board. He served 11 years in that volunteer capacity.Mac has been a member of various chambers of commerce in each community he has lived in. He was a member of the Canadian Institute of Mining and Metallurgy for 15 years until 1989. Also, he was a member of the Baie Verte Peninsula Health Centre’s board of directors from 1984 to 1989. In addition, Mac Moss was a member of various development associations. In Gander, he was a member of the Provisional Board of the Kittiwake Economic Development Corporation.In 2006, he was appointed to the board of the Central Northeast Health Foundation, the fundraising foundation for the central northeast part of the Central Health District. He founded a Health Foundation Boating Regatta, and 14 years later, that little regatta has raised over half a million dollars for health care in the region.In 2015, Mac Moss was awarded the Gordon Seabright Volunteer of the Year Award as the most outstanding volunteer in the province.Mac lives in Gander with his wife, Nellie. They have three adult daughters, three granddaughters, and four grandcats!