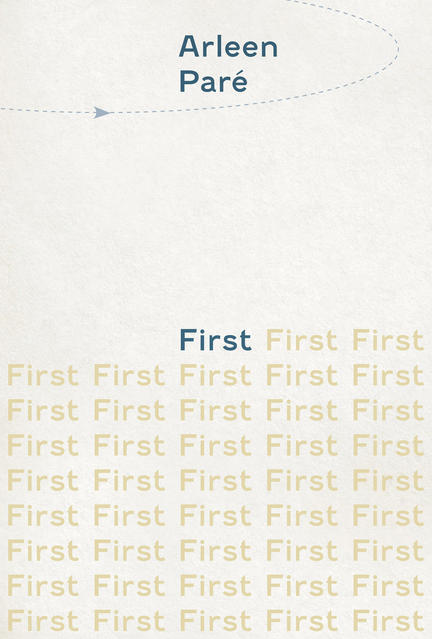 Governor General’s Award–winning poet Arleen Paré combines the story of two first best friends with questions of the mystery of cosmic first cause.

The poems in First, Arleen Paré’s seventh collection, search for a long-lost first friend. They conjure the subtle layers of meaning in that early friendship to riff on to a search for how we might possibly understand the primal First: the beginnings of the cosmos that contains our own particular lives, beginnings and longings.

This layered evocation of the past—of childhood in 1950s Dorval, “a green mesh of girls friendships and fights”—and the intensity of the desire to know, give First its haunting beauty. “[T]he word though old fashioned,” Paré writes, “is whence . . . unconditioned origins” when “no worthy question is ever answered on the same plane that it was asked; how to frame the question not knowing the plane on which I must ask it.”

“Arleen Paré’s First is an intriguing Gertrude Stein as Nancy Drew mystery. Using prose poem narrative and an intense syntactic poetics, Paré discovers the cracks in memory as she documents the search for her first best friend. The cracks in this lyrical puzzle are heightened by a very active and assertive poetic language that compels as it decodes the investigation of childhood memory and desire. The writing in First demonstrates a powerful juxtaposition of the continuous present with the continuous past.” —Fred Wah

“This brilliant collection revolves around firsts, especially a first friend, ‘the impress of her never gone.’ So too with these poems—tough, sweet and poignant, so surely rendered and musically rich—the impress of these poems never gone.” —Lorna Crozier

Arleen Paré's First book, Paper Trail, was nominated for the Dorothy Livesay BC Book Award for Poetry and won the City of Victoria Butler Book Prize in 2008. Leaving Now, a mixed-genre novel released in 2012, was highlighted on All Lit Up. Lake of Two Mountains, her third book, won the 2014 Governor General's Award for Poetry, was nominated for the Butler Book Prize and won the CBC Bookie Award. Paré's poetry collection, He Leaves His Face in the Funeral Car, was a 2015 Victoria Butler Book Prize finalist. The Girls with Stone Faces, her fifth book, won the American Golden Crown Award for poetry in 2018. Her sixth book, Earle Street, was released in Spring, 2020. She lives in Victoria with her partner of forty years.

Sixty-Three Green Circle Melrose one–one seven five two my locational numbers plus one baby sister for free a mother for safety and a blue car for long drives and one father at work leaving in the blue car morning a Dodge as well as dodge ball and hopscotch skipping ropes skipping Hopalong Cassidy how about a date meet you at the corner at half-past eight in the street stando yelling stando against a brick wall roller skates hide-and-go-seek answers in school also the pressure cooker beef stew steamed lemon pudding the creek behind McTavish’s house up-on-the-hill train tracks which a child cannot walk near the golf course where toboggans in winter and brown strap-on rubber boots in the spring saddle shoes tap shoes toe shoes white bucks Pat Boone gumshoe Nancy Drew rubber soles and cartwheels and handstands though at night devils clawed the closet and snakes rustled under the bed despite now I lay me down to red rover red rover Red River coats and red Red River mittens grade one grade two grade three a party line a best friend.

How does the leaf know how does Turkish Finnish Kurdish French where do numbers whence negative why and whence zero is it fact or concept how instinct neurons for instance quarks cockroaches rats for instance mirrors mirror cells the Mariana Trench how many creatures will never be seen soufflés pavlova pavlovae how cells know how on earth friends the cosmos how far back where did she go what means without any start missing and end without end without start quantum physics theoretical higher math mathematics how the big bang string theory the Cern Cyclotron Stephen Hawking how does a friend falling off with Einstein altogether the Earth why and which equations and how mainly from where.

In the inside there is deluge, in the outside there is missing. Somewhere is refuge. Quickening. Listen. Let is-ness then be the business, let mothers into story if only for a few more years. If quickening, there may be answers, whistle, wind, chance literation, chance marriages, misfits, chance the first chance, do not reprove the child asking awkward questions. Let blue angora mittens, a black cat, second fiddle. There is a second layer, liar, liar, pants on fire. Never mind, there is always porridge with a sift of salt and garbage bins under the sink whispering misery in an off-key pitch. Cinch your belts, no one here is as rich as you may wish. Hey diddle, diddle, kit and kaboodle, cows, spoons, a cat in a fix. In the inside there are two. In the outside, there is one and one sitting, unseeing what will be missing. Heaven whistles by in its finite fevered way, tin whistle stops and lingerie, saxifrage and lingering, and tips. Q-tips. Second storey is higher than first, pinch me if I’m wrong, never mind, the second story is typically too blue, too long.

Other titles by Arleen Paré

Time Out of Time

The Girls with Stone Faces

He Leaves His Face in the Funeral Car