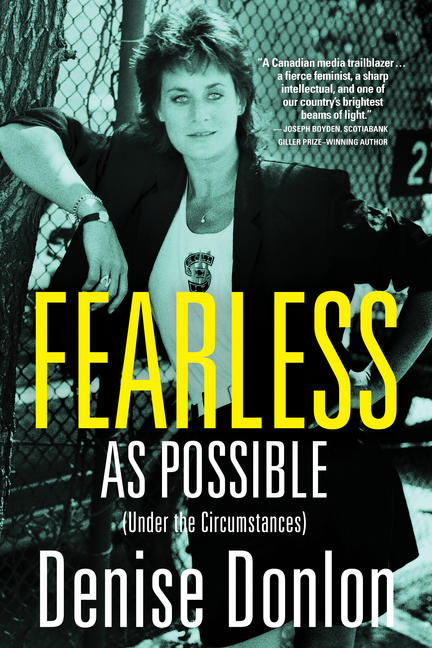 In this smart, funny, and inspiring memoir, Denise Donlon recounts her journey as a corporate leader at the forefront of the massive changes in the Canadian music and media industries.

One of Canada’s most celebrated and dynamic corporate leaders and broadcasters, Denise Donlon has long been recognized as a trailblazer in the Canadian cultural industries. In Fearless as Possible (Under the Circumstances), Donlon chronicles her impressive and storied career at MuchMusic, Sony Music Canada, and CBC English Radio, which put her at the forefront of the massive changes in the music industry and media. Throughout her incredible journey, she shares colourful and entertaining stories of growing up tall, flat, and bullied in east Scarborough; interviewing musical icons such as Keith Richards, Run-DMC, Ice-T, Joni Mitchell, Neil Young, Annie Lennox, and Sting; and detailing her life-changing experiences with War Child Canada, Live8, and the Clinton Giustra Enterprise Partnership.

Told with humour and honesty, Fearless as Possible (Under the Circumstances) is a candid memoir of one woman’s journey, navigating corporate culture with integrity, responsibility, and an irrepressible passion to be a force for good.

DENISE DONLON is one of Canada’s most successful broadcasters and corporate leaders. She has been a co-host and producer of The NewMusic, Director of Programming and VP/General Manager of MuchMusic/CityTV, President of Sony Music Canada, General Manager and Executive Director of CBC English Radio, and co-producer and co-host of The Zoomer. She has also devoted herself to numerous charitable initiatives, working with organizations such as WarChild Canada, MusiCounts, and the Clinton Giustra Enterprise Partnership. She sits on a number of boards and has been honoured with the Humanitarian Spirit Award and the Trailblazer Award at Canadian Music Week, Woman of the Year from Canadian Women in Communications, Woman of Vision from Wired Women, and was inducted in the Broadcast Hall of Fame. She is a Fellow of the Royal Conservatory of Music and a Member of the Order of Canada. She lives in Toronto with her husband, Murray McLauchlan, and their son, Duncan.

Listen to the Music