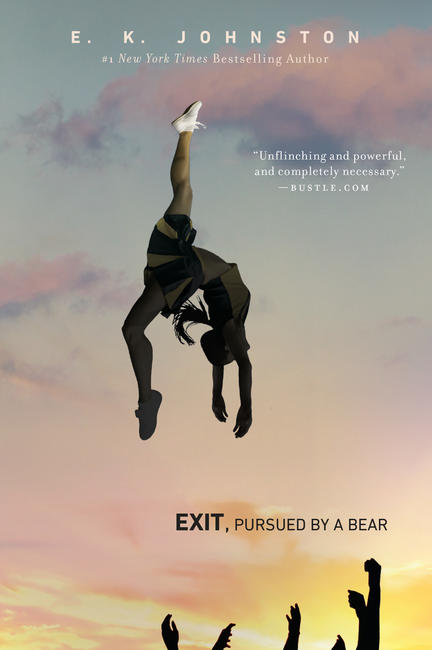 From #1 New York Times bestselling author E.K. Johnston comes a brave and unforgettable story that will inspire readers to rethink how we treat survivors.

Hermione Winters is captain of her cheerleading team, and in tiny Palermo Heights, this doesn’t mean what you think it means. At PHHS, the cheerleaders don't cheer for the sports teams; they are the sports team—the pride and joy of a small town. The team's summer training camp is Hermione's last and marks the beginning of the end of…she’s not sure what. She does know this season could make her a legend. But during a camp party, someone slips something in her drink. And it all goes black.

In every class, there's a star cheerleader and a pariah pregnant girl. They're never supposed to be the same person. Hermione struggles to regain the control she's always had and faces a wrenching decision about how to move on. The rape wasn't the beginning of Hermione Winter's story and she's not going to let it be the end. She won’t be anyone’s cautionary tale.

"This story of a cheerleader rising up after a traumatic event will give you Veronica Mars-level feels that will stay with you long after you finish."—Seventeen Magazine

E. K. Johnston is the #1 New York Times bestselling author of several YA novels, including the L.A. Times Book Prize finalist The Story of Owen and Star Wars: Ahsoka. Her novel A Thousand Nights was shortlisted for The Governor General's Award. The New York Times called The Story of Owen “a clever first step in the career of a novelist who, like her troubadour heroine, has many more songs to sing" and in its review of Exit, Pursued by a Bear, The Globe & Mail called Johnston "the Meryl Streep of YA," with "limitless range." E.K. Johnston lives in Stratford, Ontario. Follow her on Twitter at @ek_johnston.

Excerpt: Exit, Pursued by a Bear (by (author) E.K. Johnston)

I start running after school. Usually I get enough of a workout between practice and gym class that I don’t do extra, but this week I feel like I might explode if I stop moving. So I run. I run up and down the streets of Palermo, looking at the houses and coloured leaves on the trees and trying to hold on to the feeling that my body is my own and limitless. I run on the country roads, the gravel crunching under my feet—until the smell of pine makes me feel sick and I fly back to the safety of concrete sidewalks. I run and run, and when I finally fall asleep at night, I am tired enough that I don’t remember my dreams.

One night, I pass the church my father and I attend whenever we’re both home on Sunday morning (so . . . about once a month, in a good month). I’ve passed the church every other night this week, but tonight the light in the office is on. Once upon a time, churches were always open, a sanctuary if you needed them. But the world changes, I guess. I haven’t given a single thought to the church since it happened, but when I see the light on, my feet slow down of their own accord, and I am knocking on the door before I know it. My fist sounds heavy against the wood. I am already having second thoughts, but it would be rude to run away. Just when I think maybe the light was left on accidentally, the door opens, and there is the minister, dressed in normal clothes, and looking a bit confused. When he sees me, his eyes widen for a moment before he makes his face neutral.

“Hello, Hermione,” he says. I wonder if he remembers my name because he’s good at his job or because I’ve been on the news. He doesn’t ask me if I’m okay. Instead he waves me in, and shuts the door. Maybe it’s because I’m in a church. Maybe it’s because this is the man who baptized me. But I’m not afraid.

“Hello, Reverend Rob,” I say, and the door latch echoes in the hallway. “I’m not interrupting anything, am I?”

“No, no.  Just practicing for Sunday. All this time, and I still get a bit of stage fright leading up to a sermon.”

I follow Rob back into his office, which is warmly lit and full of old books. He waves me into one of the seats. I have just realized what it is I want to say, what I want to ask him.

“I’m fine, thank you,” I say, feeling profoundly awkward. I keep finding new ways to do that. “I don’t come here very often.”

“That’s okay.” He’s sitting comfortably in his chair. People are never comfortable around me anymore. “I know how life goes. Schedules and the Church don’t always get along, so I do my best to operate an open door policy.”

“Thank you.” I pause for a moment to gather my thoughts.  I think of the looks I’ve been getting at the grocery store, and take a deep breath. “Please don’t ask people to pray for me.”

Praise for Exit, Pursued by a Bear
"E.K. Johnston's latest gripping novel for young adults  . . . is both a well-plotted whodunit and a tightly woven examination of how we as a society respond to — and often judge — rape victims."—The Chicago Tribune
“Unflinching and powerful, and completely necessary” —Bustle

"A powerful rape survival story to make you believe in a better world."—The Rumpus

"While assault survivors, both in fact and in fiction, often find their lives narrowed to this one designation, Johnston refuses to flatten her heroine. Instead, she insists that Hermione's joy in being thrown into the air during cheer routines, and the strength of her best friendship with co-captain Polly are just as vital to our understanding of her as the facts of her assault."—Margaret H. Willison, NPR book critic
"A raw, powerful story that’ll stay with you long after it’s over.”—Buzzfeed

"E.K. Johnston has a seemingly limitless range. This is realistic fiction at its best."—The Globe & Mail

"Every girl who has ever been sexually assaulted or known someone who has, should read this book. So should every boy who has ever raped or known one who has. Every reader might try to be a friend like Polly. E.K. Johnston writes so well, showing a dark reality highlighted by compassion."—The News-Gazette

“ "Johnston’s clever—but never precious—update of Shakespeare’s The Winter’s Tale is unflinching but not at all graphic in its treatment of sexual violence.... Middle and high school readers will pass this powerful, engaging story around and around."—Kirkus Reviews, starred.
? "Fierce and gorgeously drawn, this is a rape story that doesn’t focus on victimhood."—Booklist, starred.

? “A beautifully written portrait of a young woman facing the unthinkable, this is a must-buy for high school collections.”—SLJ, starred.
? "While Hermione is a victim, Johnson never portrays her as victimized, instead focusing on how Hermione reasserts control over her life with help from family, friends, and therapy, using her own decisions to push back against something in which she had no such choice." —PW, starred.
? "The reader is kept engaged, and – like Hermione – hopeful, even in the darkest moments. [...] Exit, Pursued by a Bear is a story of triumph, not just survival."—Quill & Quire, starred.
? "Johnston creates a strong female main character that will not be afraid, and refuses to be a cautionary tale or a pariah.” —SLC, starred
"Exit, Pursued by a Bear is an important new novel comparable with Speak by Laurie Halse Anderson.”—VOYA

"...nothing short of epic." —The Horn Book Magazine

“Gripping and devastating.” —Anne Ursu, author of The Real Boy
"Exit, Pursued by a Bear is a must-read. Bracing, intimate, tense, and delightful."—Martha Brockenbrough, author of The Game of Love and Death
“Exit, Pursued by a Bear is a story about a girl. A cautionary tale about someone who didn't want to be a cautionary tale. An important book for girls. For boys. For adults. For mothers and fathers and daughters and sons and girlfriends and boyfriends. An important book without being an 'Issue Book.' And I loved it.” —New York Times bestselling author Jessica Day George
"I WAS NOT WARNED THAT I WOULD CRY THIS MUCH."—New York Times bestselling author Rachel Hartman
"Should a young reader ever need guidance following an assault, she could do much worse than to emulate Hermione Winters."—Bookpage, Top Pick

"This is a vital book about the importance of creating a strong system of support for victims of assault." —Bookish

A Publishers Weekly Best Book of 2016

A finalist for Audible’s Best Young Adult Audiobook of 2016

Other titles by E.K. Johnston