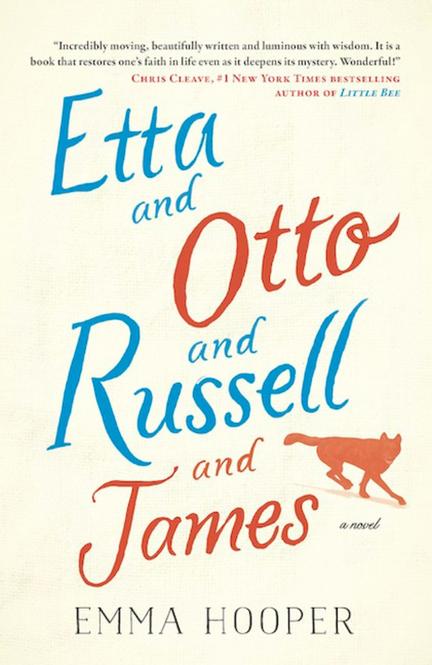 Eighty-two-year-old Etta has never seen the ocean. So, early one morning she takes a rifle, some chocolate, and her best boots, and begins walking the 3,232 kilometers from Saskatchewan to Halifax.

Her husband, Otto, wakes to a note left on the kitchen table. I will try to remember to come back, Etta writes to him. Otto has seen the ocean, having crossed the Atlantic years ago to fight in a faraway war. He understands. But with Etta gone, the memories come crowding in, and Otto struggles to keep them at bay.
Russell has spent his whole life trying to keep up with Otto and loving Etta from afar. He insists on finding Etta, wherever she’s gone. Leaving his own farm will be the first act of defiance in his life.
As Etta walks farther toward the ocean, accompanied by a coyote named James, her past and present blur. Rocking back and forth with the pull of the waves, Etta and Otto and Russell and James moves from the hot and dry present of a quiet Canadian farm to a dusty burnt past of hunger, war, passion, and hope; from trying to remember to trying to forget.

This is a gorgeous literary debut about an elderly woman's last great adventure walking across Canada—a beautiful novel of pilgrimage, of fulfilling lifelong promises, of a talking coyote called James, and of unlikely heroes.

Raised in Alberta, Canada, Emma Hooper brought her love of music and literature to the UK, where she received a doctorate in Musico-Literary studies at the University of East-Anglia and currently lectures at Bath Spa University. A musician, Emma performs as the solo artist Waitress for the Bees, and was awarded a Finnish Cultural Knighthood. She also performs with the Stringbeans Quartet and has toured with Peter Gabriel and Toni Braxton. She lives in Bath, UK, but goes home to Canada to cross-country ski whenever she can.

“Magical... such wonderfully assured storytelling: it's been a very long time since a book has taken me by the hand - and the heart - as this one has.” —Sarah Winman, international bestselling author of When God Was a Rabbit

“A fan of Audrey Niffenegger and Alice Munro, Hooper's sense of playfulness comes across in the book's gentle magical realism.” —The Observer (UK)

“Charming, sweet...there is a singing simplicity that cuts through to the heart of things...fresh and touching.” —Sunday Times (UK)

“Canadian Emma Hooper is sure to be 2015's face of literary quirk.” —Grazia (UK)

“Drawing on wisdom and whimsy of astonishing grace and maturity, Hooper has written an irresistibly enchanting debut novel that explores mysteries of love old and new, the loyalty of animals and dependency of humans, the horrors of war and perils of loneliness, and the tenacity of time and fragility of memory.” - Booklist Starred Review

“Debut novelist Hooper’s spare, evocative prose dips in and out of reality and travels between past and present…This is a quietly powerful story whose dreamlike quality lingers long after the last page is turned.” - Library Journal Starred Review

“Tenderhearted and enchanting, Etta and Otto and Russell and James takes us on an incredible cross-country journey—from dusty land to stormy sea, from small moments of sweetness to grand gestures of love.” - Marjorie Celona, Giller Prize nominated author of Y

“Emma Hooper has performed something of a miracle here, breathing new life into the venerable tradition of the prairie novel. Her world is familiar but transformed with lightness, wit, and generosity. Her characters are young and old at the same time, they are dreamers and practical people, they are your neighbours and they are magical beings you could never meet. When I finished the book I applauded.” - Thomas Wharton, winner of the Commonwealth Writers Prize for Best First Book

"Etta and Otto and Russell And James by Emma Hooper is incredibly beautifully written, and luminous with wisdom. It is a book that restores one's faith in life even as it deepens its mystery. Wonderful!" - Chris Cleave, New York Times Bestselling Author of Little Bee

“Etta and Otto and Russell and James is an extraordinary, imaginative story. As delicate and wondrous as a heartbeat.” - Shandi Mitchell, award-winning author of Under This Unbroken Sky

"In this haunting debut, set in a starkly beautiful landscape, Hooper delineates the stories of Etta and the men she loved ... as they intertwine through youth and wartime into old age. It's a lovely book you'll want to linger over." - People

“A magical, big-hearted book. . . If Wes Anderson's stylized dream worlds make you happy, you need a copy of Etta and Otto and Russell and James.” - Elle

“Hooper is a surprising and imaginative writer. . . The novel is a satisfying, evocative read that brings a fresh lens to traditional themes of love, war and, ultimately, taking the journey of a lifetime.” - Macleans

“A celebration of the power of words — and of imagination.” - Toronto Star

Hooper’s debut is a novel of memory and longing and desires too long denied. On Saskatchewan’s Great Plains grew 15 Vogel children. When Otto Vogel was still a child, half-orphaned Russell joined the brood. The Great Depression burned on, crops failed, and schooling was casual. One of the teachers was Etta, no older than Otto and Russell. World War II came. Otto left. Russell, broken leg improperly mended, could not. As Hooper’s shifting narrative opens, now-83-year-old Etta awakens, intending to walk to Canada’s east coast, leaving a brief note for her husband, Otto. She carries a bit of food, a rifle, and a note of her identity and home. To a Cormac McCarthy–like narrative—sans quotation marks, featuring crisp, concise conversations—Hooper adds magical realism: Etta’s joined by a talking coyote she names James, who serves as guide and sounding board. With Etta absent, Otto begins baking from her recipes, his companion a guinea pig, always silent. Soon Otto becomes obsessed with constructing a menagerie of papier-mâché wildlife. Russell, shy lifelong bachelor and Etta’s wartime lover, follows her, finds her, only to hear her urge him to seek his own quest "because you want to and you’re allowed to and you can. You could have if you wanted to enough"—the novel's thematic heart. Russell disappears into flashbacks. Hooper reveals more of Etta and Otto in letters exchanged during World War II, where Otto by turns is terrified, sickened and enthralled. Otto marries Etta on return, a less than perfect union shadowed by damaged Otto striking out at Etta. With beautifully crafted descriptions—derelict farm machinery as "gently stagnant machines"—Hooper immerses herself in characters, each shaped by the Depression. The book ends with sheer poetry, stunning and powerful, multiple short chapters where identities and dreams, longings and memories shift and cling to one character and then another within the "long loop of existence." A masterful near homage to Pilgrim’s Progress: souls redeemed through struggle. - Kirkus Review

“A bright new star of literature has been born.” - The Times

Other titles by Emma Hooper

We Should Not Be Afraid of the Sky