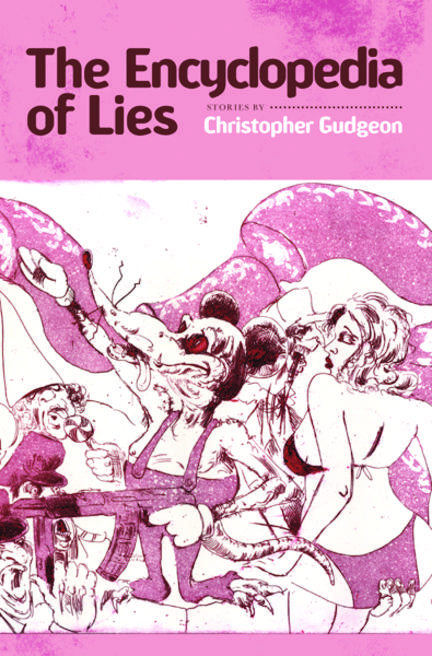 ”To give a feeling of Christopher Gudgeon’s new collection, let’s turn to the story that gives the book its name. In The Widow Soré, the title character finds among her deceased fiancé Guillermo’s papers what appears to be a stack of letters. Titled The Encyclopedia of Lies, the letters recount the romantic, outsized exploits of another Guillermo, or one whom Isabel takes to be another Guillermo, because this must be a work of fiction, unless. Isabel travels to visit another woman who might hold the answer. ‘Any evidence regarding the true nature of Guillermo – whether he was one man or two, many or all – was not as important as the words each woman used to define their memories of him,’ Gudgeon writes. The implication runs through Gudgeon’s motley crew: roughly half of these 16 stories contain a recurring cast glanced from multiple angles. We contain multitudes, but our many-or-allness is less important than the stories that define us, even if those stories turn out to be an encyclopedia of lies.”(The Globe and Mail)

"Here’s a writer with real range. … Some stories are very short, just two pages; several are connected. There are 26 in all, many memorable, most pitch-perfect.” (Toronto Star)

In these sixteen stories, Christopher Gudgeon, bestselling author of the critically acclaimed Song of Kosovo,takes a heartbreaking and hilarious look into the lives, loves, sexual obsessions and delusions that inform a grand cast of off-kilter characters.

Here is a gay couple who persevere with their marriage plans as the world, literally, crumbles around them, a woman who discovers the mysterious collection of letters that reveals a terrifying truth about her deceased finance, a dutiful son, locked in an life-or-death marathon race with his famous father, and a baby who becomes infested with fruit flies, sending his adoptive parents into a spiral of recrimination and self-doubt.

At once bitterly funny, provocative and poignant, this remarkable collection, follow up to Greeting from the Vodka Sea, Gudgeon’s short story debut, The Encyclopedia of Lies builds on his growing literary reputation, offering up the work of a great storyteller at his very best.

Christopher Gudgeon is an author and poet and screenwriter. He’s contributed to dozens of periodicals, including Playboy, MAD, National Lampoon, Geist, Event, and Malahat Review; and has written seventeen books, from critically acclaimed fiction like Song of Kosovo and Greetings from the Vodka Sea, to celebrated biographies of Stan Rogers and Milton Acorn, to a range of popular history on subjects as varied as sex, sexuality, fishing and lotteries. Gudgeon has more than 150 professional TV and film credits including creating, writing, and producing the Gemini-award winning series Ghost Trackers and the documentary, The Trick with the Gun. In his varied and spotty career, Gudgeon has worked a variety of jobs across Canada, the United States, and Europe including psychiatric orderly, rent boy, bartender, rock musician, rodeo clown, TV weatherman, and youth outreach worker. Gudgeon, who is bisexual, has been in an open relationship with author/self-help guru Jasper Vander Voorde since 2009. He divides his time between Los Angeles and Victoria, B.C.

Other titles by Christopher Gudgeon

The Encyclopedia of Lies

The Sound of One Team Sucking