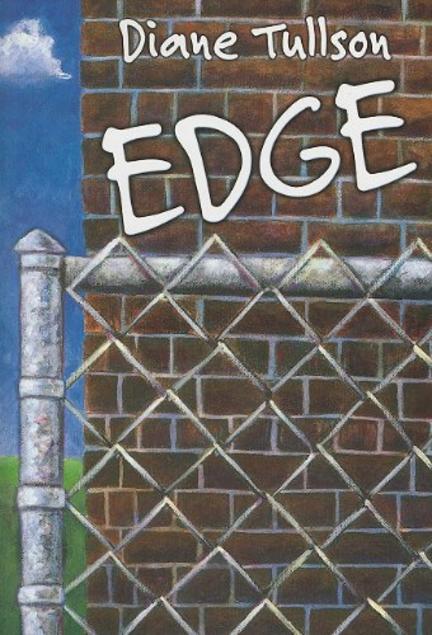 Ever since Marlie started grade nine, she's been an outcast by the rest of the school — even her own best friend. She finds her place among a group of students, who, like herself, are social misfits and often bullied by their classmates. One of Marlie's new acquaintances, Mike, is especially serious about getting back at the bullies--dead serious. When Mike plots for the groups revenge to take place at a formal school dance, Marlie's fear that he might seriously hurt people compels her to take matters into her own hands.

If the story seems dark, it is. But Marlie has a wicked sense of humor. And her mentor, the lovable undertaker Chuck, provides a perfect foil for the serious subject material. Imagine learning how to apply make-up from a guy who prepares corpses for their funerals!

Edge's subject is timely, and it's characters are unusual but believable. The tone is accessible to all young adults, but with enough metaphor and symbolism to interest the sophisticated reader. The pace at times breathless, and the resolution is as satisfying as the subject allows, as Marlie develops the strength she needs to stand alone, if she must.

Edge is a great read for today's teen — tragic and funny, it's a story too many can relate to.

Diane Tullson grew up in Calgary, Alberta, and has studied English literature, journalism and editing. Before becoming an author, Diane worked in newspaper, radio and travel. She is a member of the Canadian Children's Book Centre, the Vancouver Children's Literature Roundtable, Children's Writers and Illustrators of British Columbia and the Writers Union of Canada. Diane has been nominated for many awards, including the Stellar Award and the Arthur Ellis Award. Diane lives with her family in Delta, British Columbia. For more information, visit www.dianetullson.com.

"The author perfectly captures the type of persecution in school halls that can be utterly terrifying for teens."
— School Library Journal

Other titles by Diane Tullson