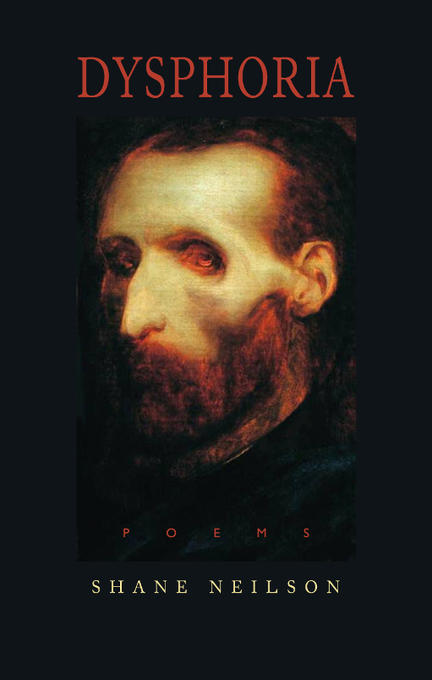 A heart-rending poetic commentary on the pain, anxiety and dissatisfaction that go hand-in-hand with mental illness, and on the complex and emotional interplay between doctor, patient and outsider.

Shane Neilson is a poet and physician who, in addition to several collections of poetry, has published in the genres of memoir, short fiction, biography and literary criticism. He is currently a fellow of the College of Family Physicians of Canada, a Vanier Scholar at McMaster University and editor for Victoria, B.C. publisher Frog Hollow Press. Though he lives in Oakville, Ontario, all of his work is rooted in rural New Brunswick.

Emotion distilled into ampoules, the inoculate
roaring at the head of the needle-who needs

depot when the body's flooded with feeble?
Perhaps the lobotomy was the right thing to do,

back when you said you understood me and, ha,
no-I understood you. In the car park, at Big Park,

Little Park, in grocery aisles, in community rinks;
past security checkpoints and through turnstiles,

it was all darkness. To the coasts, I roar:
When a man loves a woman, he can't keep his mind.

Oh needle of lonesome, here's my ass one more time.
Last night, you asked 'How does it feel?'

Percy? Sing for us? She can bring him such misery
if she plays him for a fool. This anthem serves the lost

in lieu of help; that's how it feels, old and good
bodies. Raise your right index finger and say

goodbye to the fool that points between your
eyes. The sensor never lies. It identifies.

The cry of pain is life -Bichat

Feel your cells.
They dwell in the drama you set,
that spell of forget and remember.
Cells are demented elephants,
atolls that move in storms.
Heaven or hell is the Brownian motion.
From the sky: portents and weather, the impetus.
In Hooke's eye, pain is an organelle.
Cells die together, as do we.
En masse, the telos is alone,

for me, that's never true.
I will die thinking of you. I will die thinking.
Of you, the pain says nothing. You are.
What I say, and sing, for I am in pain,
and have always been: I am alive.
Pain is not the cry.
The cry is that I think of you,
I think of life.

Difficult at times, but immensely rewarding, Dysphoria is alternative medicine for the mind and the soul.

Shane Neilson uses his background as a physician and his interest in old medical writings to inspire his darkly probing poetry collection Dysphoria.

Dysphoria follows Neilson's collections Complete Physical and On Shaving Off His Face, touching on many of the same themes as those books: the relationship between doctor and patient, the problems of mind and body, and the treatments that often seem to inflict pain as much as alleviate it.

In his medical practice and in these poems, some of which were previously published in literary journals and anthologies, Neilson studies mental illness, pain, and disability as a firsthand witness and as an interpreter. The book is uncomfortable at times, and its title is achingly appropriate: dysphoria is defined by Merriam-Webster as 'a state of feeling unwell or unhappy'; Neilson so convincingly illuminates the world of the mentally ill that it's a relief to put the book down. But it is through his detailed poetic illuminations that these experiences become not just things described, but also deeply felt.

The book is divided into three parts, the first of which earned a spot as a finalist in The Seattle Review's 2016 Chapbook Contest. The title and introductory poem, 'Dysphoria,' is a sixteen-part, eighteen-page epic that uses lyrical enjambment to propel its nimble wordplay, and entertains as it empathizes-perhaps best exemplified by its narrator selectively quoting Percy Sledge while alluding to mental illness ('When a man loves a woman, he can't keep his mind').

Alliteration, repetition, assonance, and consonance are all on display as the poem continues:

Puritanicals burn at the stake while witches watch.
In Hades's soft middle the middle class yearns. Sky
riots to azure. Pure from purging cures, we can't lose
what we know. Go back to Genesis-we ate the fruit
from the tree. Didn't we? The lost are found. New losses
levy fees. Who among us allows us; who are we? Nemeses.

The book's second section draws inspiration from Dr. Benjamin Rush's 1812 book Medical Inquiries and Observations Upon Diseases of the Mind, pulling phrases for use as lines or titles, and examining such subjects as bloodletting and patients who imagine themselves to be made of glass. In the long-titled poem 'Letters to Dr. Rush from an escaped man, who was so happy in his paroxysms of madness, that when he was well he longed with impatience for their return,' Neilson cuts to the core of madness and identity, and what it costs to change that identity-or to have it changed by others. The third section, 'Pain on a One-to-Ten Scale,' features moving meditations on pain, both physical and emotional.

Showcasing a variety of perspectives on these subjects, Neilson is able to find fertile new ground, even in his now-familiar fields of medicine and mental illness. Dysphoria is further enhanced by a relevant and profound selection of drawings for the interior pages, culled from a nineteenth-century French book on mental maladies.

Despite occasional bits of humor, Dysphoria is not a light read, neither in its content nor its delivery; it requires, and deserves, careful attention to parse the many allusions and references, or to appreciate the poetic techniques masterfully utilized by Neilson. Difficult at times, but immensely rewarding, Dysphoria is alternative medicine for the mind and the soul.

Neilson's poetry itself matures from volume to volume. Where Complete Physical is straight lyric poetry that is common in early twenty-first century Canadian literature, On Shaving Off His Face is a jarring, muscular exploration of ideas through play in prose and poetry. Dysphoria finds Neilson mastering the balance between the two. It is a difficult and sometimes uncomfortable read, but it insists on being revisited. The whole trilogy stands as necessary reading at a time when society continues to demonize mental illness rather than support those who live with it daily.

'Above all, Dysphoria and the trilogy as a whole ask that we adopt new ways of seeing, hearing, and feeling, and open ourselves to the abilities of the dis/abled: "do not break / the line" of "delusion," Neilson urges: "Instead, / redraw it by first / marvelling at the line's elegance"....

'These are not easy books. The poetry is dark and difficult; its reading requires the close attentiveness, the perseverance through confusion and disorientation, that Neilson demands we devote also to those who suffer. And yet potential-hope-glimmers at the heart of the trilogy.'

'A key component of Neilson's work, as it is in all narrative medicine, is voice. Neilson's poetry has influenced me immensely-his words are a methodology, not of cure but of recovery. Though, in illness, those who suffer may lose themselves, shake their fists in bewilderment at circumstance, Neilson's books are fundamentally an appeal for wonder, complexity and love.

'As patient, as poet, and as practioner, Neilson urges those in distress to sing their passions, their furies, their illnesses-precisely what he has done in the trilogy reviewed here-and, just as importantly, encourages the rest of us to stand alongside, in the glare, and bear witness.'

'Dysphoria is a powerful example of narrative medicine, and Neilson's poems hope that we might all strive to deliver better care guided by compassion, understanding, and definitive deduction: any other path points toward despair. Apathy, callousness, cruelty, and distance: these attitudes and approaches have no place in healthcare, and it is these practices, rather than archaic ones, that Dysphoria takes to task.'

Poetry collections are to springtime what ripe peaches are to late summer, and let me tell you: the crop this year is splendid.