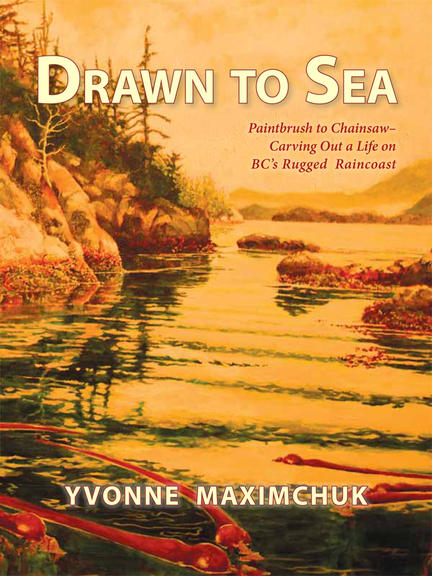 In the early 1980s, Yvonne Maximchuk, a single mother of two, was living in Whiterock, BC, and making a living as a working artist and art instructor. Then she fell in love with Albert, a crab fisherman who fished the waters of Boundary Bay. Drawn to his seemingly idyllic life and her desire for connection with the natural world, Yvonne and her children moved with Albert to Echo Bay, a tiny settlement east of Vancouver Island.

Life in this remote community was a lot different from life in the city: there was no running water and electricity had to be generated. The closest grocery store was two hours away by boat, and even a small emergency could be life threatening. But in spite of the challenges, they persevered, building a homestead and thriving “off the grid.” In this new life, Yvonne learned to do things she had only dreamed of. She cleared land, helped build their home and got to know the community of hardy folks who were always there to help one another.

Soon after arriving in Echo Bay, Yvonne met Billy Proctor, a BC coastal icon and fisherman. Intrigued by his life on the sea, she asked to join him as he fished the coast looking for chinook and sockeye salmon, ling cod and tuna. Eight seasons of fishing with Billy took her on many adventures to the challenging waters and enchanting islands of BC. Inspired, she captured on canvas the mysteries and treasures of the wild Pacific coast.

In Drawn to Sea, Yvonne creates stunning, lyrical word pictures of her home in the Broughton Archipelago. Making the most of the tools available, from paintbrush to chainsaw, she has flourished in this remote area, carving out a home and a career in a place far from just about everyone.

Yvonne Maximchuk was raised in the Lower Mainland where she graduated from Douglas College with an Associate of Arts degree. She now lives with her husband, Albert Munro, and their new kitty, in the home, studio and art retreat they built on the shore of Gilford Island near Echo Bay. When she is not painting or working with clay she explores the beauty and mystery of the islands and inlets in her 16-foot speedboat the Sea Rose. She often ties her boat to bull kelp to hold it in position while she paints on location. Yvonne co-wrote Full Moon, Flood Tide, published by Harbour Publishing in 2003.

She has captured nature at its finest. Through this book you will understand the lens she uses to see nature and the world around her that she expresses in her painting. She uses her words like a paintbrush to describe the beauty of everyday life on the BC coast.

Other titles by Yvonne Maximchuk

Tide Rips and Back Eddies