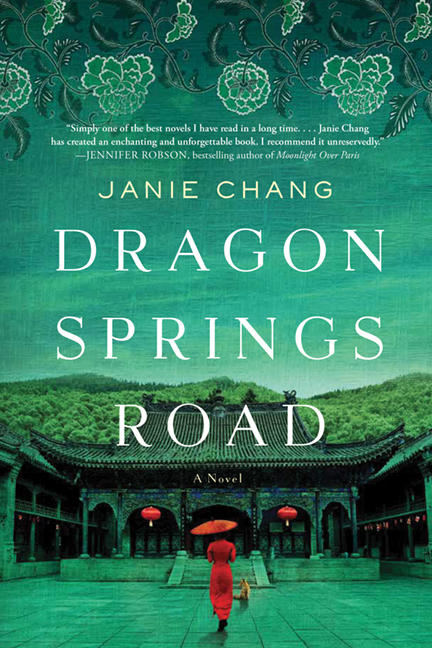 “Filled with enchantment and intrigue” (Toronto Star) and “a great choice for a book club” (The Huffington Post), Dragon Springs Road takes readers on an evocative journey a century in the past and half a world away.

In early-twentieth-century Shanghai, an ancient imperial dynasty collapses, a new government struggles to life and two girls are bound together in a friendship that will be tested by duty, honour and love.

Abandoned in the courtyard of a once-lavish estate outside Shanghai, seven-year-old Jialing learns she is zazhong—Eurasian—and thus doomed to face a lifetime of contempt from both Chinese and Europeans. The Yang family, new owners of the estate, reluctantly take her in as a servant. As Jialing grows up, her only allies are Anjuin, the eldest Yang daughter, and Fox, an animal spirit who has lived in the courtyard for more than three hundred years. But when a young English girl appears and befriends the lonely orphan—and then mysteriously vanishes—Jialing’s life takes an unexpected turn.

As Jialang grows into womanhood during the tumultuous early years of the Chinese republic, she must find a way to survive political intrigue, jealousy, forbidden love and even murder. Through every turn she is guided, both by Fox and by her own strength of spirit, away from the shadows of her past toward a very different fate. “Rich with detail and a fascinating interplay between the spiritual and earthly realms, Chang’s second novel explores whether it is possible to overcome your past” (Booklist).

Janie Chang writes historical novels that draw upon family history for inspiration. She grew up listening to stories about ancestors who encountered dragons, ghosts, and immortals, and about family life in a small Chinese town in the years before the Second World War. Her second novel, Dragon Spring Road, was released in January 2017. Her first novel, Three Souls was a finalist for the 2013 BC Book Prizes fiction award, one of 9 Canadian novels long listed for the 2015 IMPAC Dublin Literary Award. Born in Taiwan, Janie has lived in the Philippines, Iran, Thailand, and New Zealand. She now lives in beautiful Vancouver, Canada with her husband and Mischa, a rescue cat who thinks the staff could be doing a better job.

“Who can resist a child in jeopardy novel especially one set against the rich background of Shanghai at the turn of the century? . . . Illuminating and vivid . . . an involving, sympathetic novel, which exemplifies the best of historical fiction.”

Roberta Rich, author of The Midwife of Venice

“Lyrical and magical . . . Chang’s lovingly crafted novel will resonate with readers long after the story is done.”

“Enthralling. . . . It’s both a pleasure and an education to read this sensitive, intelligent novel.”

“Chang unfurls this intriguing story—set against the chaotic backdrop of China in the early twentieth century-with precision. Rich with detail and a fascinating interplay between the spiritual and earthly realms, Chang’s second novel explores whether it is possible to overcome your past.”

“Filled with enchantment and intrigue, this novel shines brightly with lyrical prose.”

“Janie Chang has a keen eye for detail and infuses them throughout this magical story, with its masterfully rendered setting of the early Chinese republic, characters who bring to life the constrictions of those girls, and a mystical benevolent spirit. The result is enchanting.”

“I absolutely couldn’t put it down. . . . One of the most satisfying, enjoyable and interesting books I’ve read in a while.”

Nancy Richler, author of The Imposter Bride on THREE SOULS

“A glorious, deeply readable novel-the kind you pick up and read voraciously, every chance you get. The kind you get lost in.”

Shaena Lambert, author of Radiance and Oh, My Darling on THREE SOULS

“[D]elightful. Chang skillfully weaves China’s story with the fate of her characters, giving the novel a tone of importance that never becomes dull or pedantic.”

“Chang unfurls this intriguing story . . . with precision. Rich with detail and a fascinating interplay between the spiritual and earthly realms, Chang’s second novel explores whether it is possible to overcome your past.”

“A remarkable read, brimming with magic and the grit of realism. . . . Chang asserts herself as an exciting, relatable voice in Canadian fiction, a voice that requires us to re-examine our relationships to place, identity, and ancestry. . . . A story for our times.”

“Dragon Springs Road is simply one of the best novels I have read in a long time. . . . Janie Chang has created an enchanting and unforgettable book. I recommend it unreservedly.”

Other titles by Janie Chang

The Library of Legends