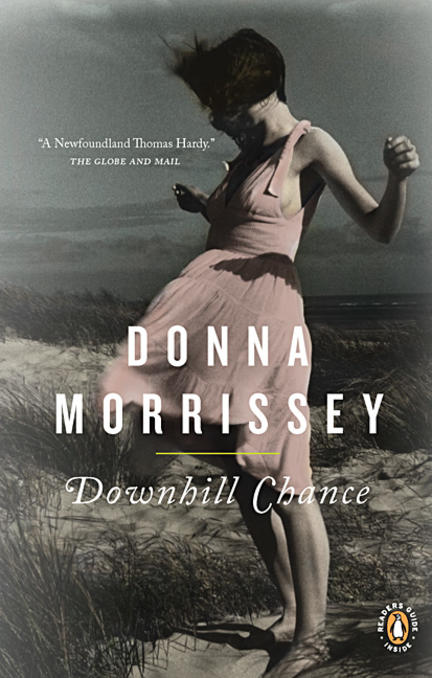 With the bestselling and beloved Kit's Law, Donna Morrissey established herself as a stunning new voice in Canadian fiction. With Downhill Chance, she has crafted a captivating successor, and in Clair Gale, she has created an unforgettable heroine. Clair is the unsinkable heart of the novel, a story of two families during wartime—the Osmonds and the Gales—joined by love, yet torn apart by fear and secrets. Morrissey blends melodrama, gritty realism and a flair for the comic in this unique novel. At its core is the unravelling of secrets—and the redemption that truth ultimately brings to the people who inhabit these pages so memorably.

Donna Morrissey was born in The Beaches, a small village on the northwest coast of Newfoundland that had neither roads nor electricity until the 1960s a place not unlike Haire’s Hollow, which she depicts in Kit’s Law. When she was sixteen, Morrissey left The Beaches and struck out across Canada, working odd jobs from bartending to cooking in oil rig camps to processing fish in fish plants. She went on to earn a degree in social work at Memorial University in St. Johns. It was not until she was in her late thirties that Morrissey began writing short stories, at the urging of a friend, a Jungian analyst, who insisted she was a writer. Eventually she adapted her first two stories into screenplays, which both went on to win the Atlantic Film Festival Award; one aired recently on CBC. Kit’s Law is Morrissey’s first novel, the winner of the Canadian Booksellers Association First-Time Author of the Year Award and shortlisted for many prizes, including the Atlantic Fiction Award and the Chapters/Books in Canada First Novel Award. Morrissey lives in Halifax, Nova Scotia.

Crouching beside him Clair watched as her father, Job, pricked the tip of his knife through the hide of a young caribou, then drew it slow and easy across its belly, the hide singing back, and the blood spilling warm over his hands, staining scarlet onto the snow. Laying the knife to one side, he slid his hands inside the warmth of the carcass and pulled out the liver, pulsating purple in the afternoon sun, and threw it quivering upon a rock.

"Don’t drop it," he cautioned as she lifted the flesh, still trembling in her hands, and ran to the cabin door, trailing a bloodied path behind her.

"Wait, Clair; wait right there," her mother called out and, snatching a frying pan off the stove, met her at the door.

That evening, at supper, Clair turned to her sister, Missy, a good six years younger than she, and said, "Mmm, tastes like berries."

"No it don’t-do it, Mommy?" protested Missy.

"Pass me the meat, Sare, I haves a bite of winter," said Job, long and gangly, his oversized features sombre as he pulled into the table besides them.

"Landsakes, you’re going to drive her foolish, the both of you," said Sare over Missy’s rising protests, the lamplight colouring their faces like apricots as she sat at the table with them. "Here, come sit besides me, my dolly. I cuts up your meat." She fussed as Missy knelt upon the bench besides her, her face haloed with curls. "Sure, no wonder she’s always prattling about fairies when all she hears is her father and sister telling lies."

"The banshees will take you," Missy warned, "and you won’t even know it because it’s winter and there’s no bluebells to ring that they’re coming."

"There, you’ve got her going agin," admonished Sare. "Eat your supper, child. You’re smaller than the fairies tickling your dreams. You too, Clair, and never mind your father’s foolishness."

Clair grinned as her father forked a piece of meat and pork scrunchions into his mouth and chomped down hard, his eyes widening with innocence as he turned them upon her. She didn’t know it then, supping back on a strip of fried onion and kicking his leg underneath the table, that winter, as she knew it, would never come again. Thus it was with the same comfort as yesterday that she scrabbled out the door that evening, dragging a piece of canvas up over the hill behind her mother, and sliding back down with Missy, her mother and father taking the lead, their shrieks echoing through the crisp night air, and the snow stinging the red of their cheeks.

It was what they did most evenings here in Cat Arm, their winter isolate till the ice broke, and their father, finished with his yearly logging, took them back up the bay to their home in the Basin. "Enough," groaned Sare, partways up the hill for the third time, dragging Missy besides her.

"Come on, come on, me b’yes, downhill chance, downhill chance," bellowed Job, walloping them on the behind much as he’d do with his old bone-wearied horse, Pearl, as he coaxed her, straining and snorting uphill, dragging a load of logs. "That’s the way," he said heartily as they managed the top and fell to their knees. "Chance to catch your breath on the way down-come on," he ordered, directing them to fall in line behind him as he plopped down on his piece of canvas. And leading the way, he swooshed back down the hill, digging his heels into the snow so’s to send it drifting back in their faces.

"Mercy," pleaded Sare as they landed in a pile at the bottom of the hill, and flopping back onto the snow, they stared up at the star-littered sky, listening as Job whistled shrilly up to the heavens, commanding the northern lights to dance.

"There they go, do you see them, Missy? See them, Clair? They’re dancing. Smile big-show your teeth, for he’s seeing us now, all lit up with his lights, and you wouldn’t want him catching you scowling, else he’ll think you’re not proud of the little small corner he’s given we."

"The foolishness of him," tutted Sare.

"Foolishness! You think this is foolishness!" exclaimed Job, expanding his arms as if to embrace the snow-blanketed evergreens, glowing white in the moonlight, and coating the hills that steepled two thousand feet above them. "Out of the garden with you, Mother-go on, out you go-that’s right, on your belly," he roared, buffing the powdery fine snow off his mitts onto her upturned face. Squealing with laughter, she shielded her face behind her scarf and crawled towards the cabin.

After cocoa and crackers, and with her father puffing on his pipe by the stove, her mother gathered her and Missy around her lap as she always did before bedtime, and read to them from the Bible, showing them pictures of archangels standing over dreaming men, while thundering clouds gathered grey in the sky behind, and a tunnel of golden light led the pathway to heaven. The reading done, she bade them to her knees and listened as they said their prayers out loud. "Now I lay me down to sleep, I pray the Lord my soul to keep; God bless Mommy, Daddy, Missy and all the starving children in the world, and the red men who died in the Congo." Then, with only the crackling of the fire and the creaking of the cabin beneath its snow-banked roof to hinder them, they recited the Lord’s Prayer in silence.

Other titles by Donna Morrissey

A memoir of a Newfoundland childhood and the raucous, terrible, amazing journey to becoming a novelist

The Deception of Livvy Higgs