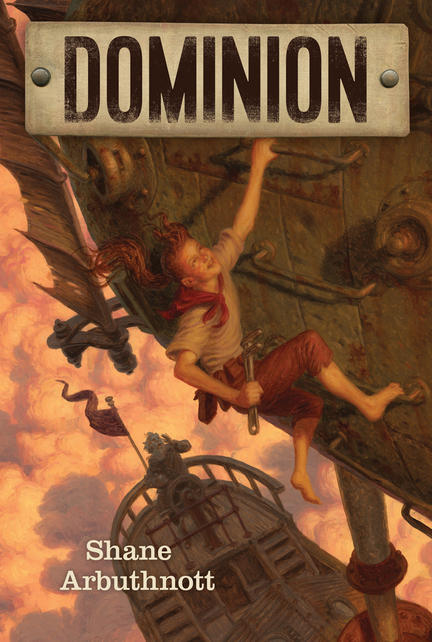 Molly grew up hearing the tales of Haviland Stout, her ancestor who discovered the dangerous magical spirits that inhabit the far corners of the world. Now, on the edge of the New World, in the British Dominion of Terra Nova, Molly and her family collect spirits aboard their airship, the Legerdemain.
But when Molly captures a spirit that can speak and claims to have been Haviland's friend, her entire life is upended. What if everything she knows about the spirits, and her own history, is a lie? In her hunt for the truth, Molly will have to challenge the most powerful company in Terra Nova and find the courage to reshape her world.

Shane Arbuthnott grew up in Saskatoon, Saskatchewan, and now lives in southern Ontario with his family. Dominion, his debut novel, was released in 2017. His short fiction has appeared in On Spec and Open Spaces. When he is not writing, he can be seen chasing his three adventurous children, trying to convince them to eat green things. For more information, visit www.shanearbuthnott.com.

"Arbuthnott's debut novel is the first part of an original, fascinating tale that offers an unusual, magical spin on how far human beings will go to gain dominion over the world...Feisty young Molly will keep [readers] grounded in this page-turning mystical adventure."

"Molly is an independent and thoughtful character, and her skill as an engineer enhances her appeal...Arbuthnott creates an intriguing steampunk world with a smooth combination of technology and magic...A fast-paced read with a strong female lead, this will leave steampunk and adventure fans looking forward to a hinted-at sequel."

"Molly's heroic rebellion against everything she has been brought up to believe and value is at the heart of an action-packed narrative. The derring-do is non-stop...The strange world the novel inhabits is inventive and loads of fun...The roustabout world of these soldiers of fortune is gender equal. Heroes and rogues can be male or female, the engineer is as likely to be a woman as a man...How refreshing."

"This book will appeal to both historical fiction and science fiction fans. I found myself unable to put this book down and envisioning it as a movie much like the beloved Harry Potter series."

"What a fabulous read! There are elements of Airborn and The Golden Compass there...and there was also a huge welter of originality, a charming band of characters—including some truly horribly baddies—and, well, all the ingredients to make it an extraordinarily imaginative first novel. What a poignant plea for our environment, not to mention a stirring indictment of slavery in all its myriad forms. A truly moving book. I hope there are many more to come."

Tim Wynne-Jones, award-winning author of <i>The Emperor of Any Place</i>

"Sometimes a book comes along that rocks you back on your heels, smacks the self-pity, the selfishness, and ignorance out of you, and makes you ashamed of your own timidity. And sometimes that book happens to be a kids' book. Read Dominion, and then read Terra Nova. Read them for you. Read them for your kids. Read them to your kids. Let your kids read them and ask you questions. I don't care how you do it; I'm just asking you to do it."

"Molly is an intelligent and spirited character…The book is filled with danger, mystery and political maneuvering, and readers will be caught up in this steampunk adventure, and will be eagerly awaiting the next installment."

“The steampunk adventure has surprising depth as Molly realizes that even doing the right thing can have deadly consequences.”

Other titles by Shane Arbuthnott

Beyond Harry: Fantasy for Tweens and Teens