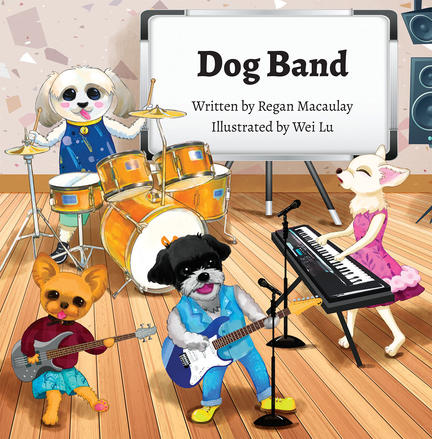 Alfie, Tubby, Ollie, and Raxl have created a band - Dog Band! Alfie is the lead singer and guitar player, Tubby plays bass, Ollie plays the drums, and Raxl is the back-up singer and can play many instruments.

But there is one problem - They don't know what kind of music Dog Band should play!

So they enlist their assortment of animal friends (from dogs to frogs!) to help them figure it out.

Regan W. H. Macaulay is an award-winning author of novels, short stories, children's literature, and scripts. Writing is her passion, but she's also a producer and director of theatre, film, and television. She is an animal enthusiast as well, which led her to become a Certified Canine and Feline Massage Therapist. Other picture storybooks include Beverlee Beaz the Brown Burmese, Sloth the Lazy Dragon, Tamara Turtle's Life So Far, Mixter Twizzle's Breakfast, Merry Myrrh the Christmas Bat, and Libby the Lobivia Jajoiana. She is also the author of The Trilogy of Horrifically Half-baked Ham, which includes Space Zombies! (based on her film, Space Zombies: 13 Months of Brain-Spinning Mayhem!-available on iTunes and DVD), They Suck, and Horror at Terror Creek.