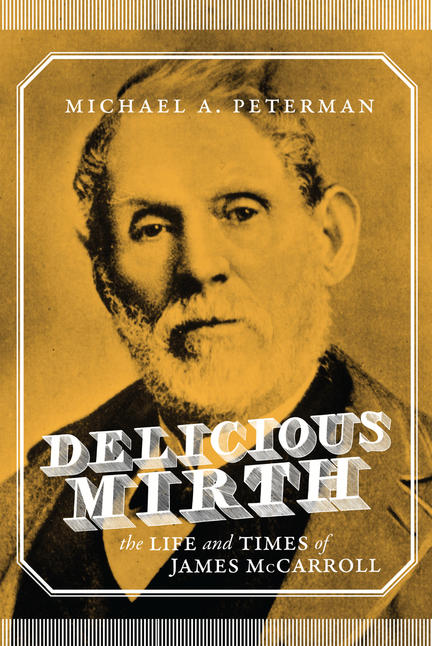 James McCarroll (1814–1892) was a talented Irish poet, journalist, humorist, musician, and arts critic who left his mark on nineteenth-century Canada by seemingly engaging with anything topical in every medium. Often writing anonymously or under pseudonyms, McCarroll's best-known nom de plume was "Terry Finnegan," who wrote weekly comic letters to his "cousin" Thomas D'Arcy McGee, offering advice on political and social matters. Yet, since his death, McCarroll's contributions to early Canadian writing and culture have largely been forgotten.

Making a case for the recuperation of Canada's lost Irish voice, Delicious Mirth seeks to gather and contextualize the extant fragments of this outspoken and flamboyant entertainer and commentator. Adept in the rich excesses of the Paddy brogue, McCarroll spoke for his beloved but broken country and sought to bring the Irish legacy of expansive prose and lyric poetry to Canada. Following the fluctuations of his personal hope, ambition, and talent through the years, Michael Peterman maps McCarroll's responses to the main events of the late nineteenth century such as Irish emigration, the settlement and growth of Upper Canada, the extension of the railway network, little magazine culture, reform politics and responsible government, the spiritualist movement, nascent Canadian theatre, classical and Celtic folk music, the US Civil War, Confederation, and most notably the Fenian movement, in which he became involved. His travels took him to many places, in particular Peterborough, Cobourg, Niagara Falls, Toronto, Buffalo, and New York City.

Revealing a man of immense creative energy and cultural significance who has been lost to Canadian literary historians for over a hundred years, Delicious Mirth shows that McCarroll's life and works are outstanding achievements and deserve fresh attention today.

Michael Peterman is Professor Emeritus at Trent University. In addition to many articles and reviews, he has written or edited fourteen books, including biographies of Susanna Moodie (Susanna Moodie: A Life) and her sister Catharine Parr Traill (Sisters in Two Worlds). He has won Trent’s Distinguished Research Award and has been made a Fellow of the Royal Society of Canada.

Other titles by Michael A. Peterman

Flora Lyndsay; or, Passages in an Eventful Life

Flora Lyndsay, or, Passages in an Eventful Life