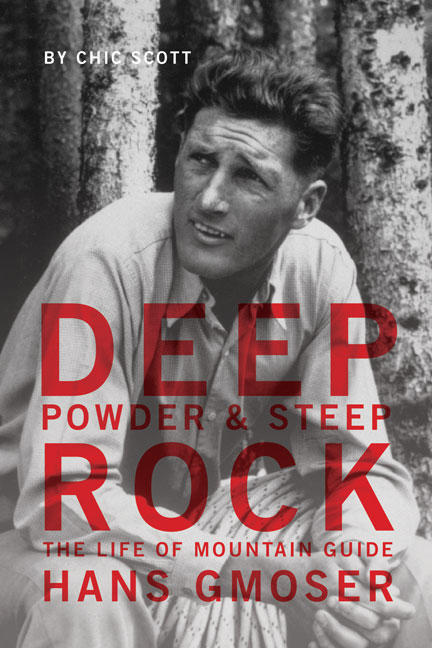 Hans Gmoser (1932–2006) was the most influential mountaineer in Canada of the last fifty years. Through innovation, hard work, perseverance and an appetite for adventure, Gmoser evolved from penniless immigrant to mountain guide for kings, queens and prime ministers. He also played a major role in creating what is now western Canada’s dynamic mountain adventure community.

Told from all aspects of his fascinating life and including some of Gmoser’s own words, Chic Scott weaves together a compelling story based on the diaries, expedition journals, film commentaries and personal correspondence of this charismatic and inspiring figure.

"Scott paints a picture of a man who lead Canada into the mountains and the book is a must read for anyone drawn to climbing and skiing."

Mountain author Chic Scott tells the story of Gmoser’s life in Deep Powder and Steep Rock. Scott’s tireless efforts to piece together Gmoser’s story shows in the book’s detail. Told from all aspects of his life, including some of Gmoser’s own words, Scott brings us one of the most compelling stories of a Canadian mountain icon that has ever been told. Intended for mountain loving audiences, this book has found a readership in new and old climbers, as well as skiers and armchair mountaineers. With winter approaching, Deep Powder and Steep Rock should be at the top of everyone’s must-read list.—Brandon Pullan, Gripped Magazine

Other titles by Chic Scott

Ski Trails in the Canadian Rockies

In the Heart of the Canadian Rockies

50 years of climbing on Yamnuska