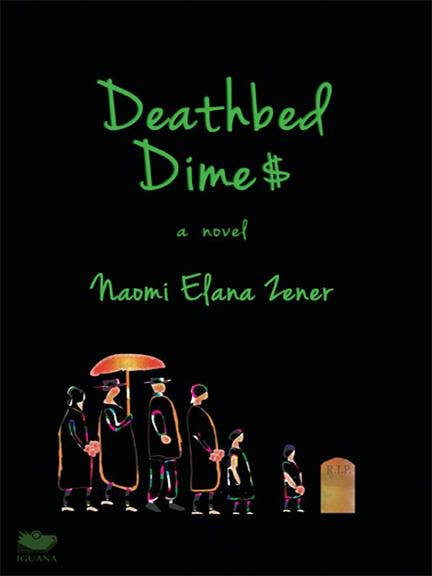 Deathbed Dimes exposes the reality that if you can outlive your relatives, friends, and sometimes even strangers, your odds of hitting the inheritance jackpot are better than playing the lottery.

Joely Zeller is a beautiful and ambitious 32-year-old attorney who is the only daughter of a Hollywood film royal. She’s determined to build a successful career, find love, and get married, all without her family’s help. To emerge from under her parents’ cloud of notoriety, Joely fled to New York upon graduation from Stanford Law School to practice Estates and Trust law at a blue-chip Wall Street law firm. Enduring 90-hour workweeks for the next eight years, she sacrificed her love life (jilted by her fiancé for his best man) only to have her career efforts foiled by her incredibly incompetent male counterpart.

Joely then sees her golden ticket to self-actualization. A serendipitous encounter with a former professor reminds her that with the impending, inevitable demise of aging baby boomers, an unprecedented wealth transfer is beginning to take place. With her experience and her Hollywood connections, she could start her own law firm back in Los Angeles. Alongside her two best friends and former law classmates as partners, Joely sets about helping the recently disowned, dispossessed, and penniless sharpen their claws as they stake their claims to the fortunes of their dearly departed.

“A funny, acerbic, and raucous read”

“Will have you turning pages and up all night. Readers of Naomi Zener’s entertaining and hilarious debut will lose themselves in the fascinating world.”

“Deathbed Dimes is a sassy and energetic novel about women making the best out of the worst. With Naomi Zener’s satirical edge, even ‘rock bottom’ is hilarious.”

“Deathbed Dimes is an edgy and witty debut novel - I can’t wait for the sequel.”

“This book is a hilarious, incredibly well-written, shrewd insider’s look at the zeitgeist of greed predominating battles people fight to inherit wealth. Reminding me of Nora Ephron’s quick wit…I couldn’t put it down.”

—Rebecca Eckler, author of How To Raise A Boyfriend and The Mommy Mob

“…a hilariously witty novel that proves you can’t keep a strong woman down.”

—Bunmi Laditan, author of The Honest Toddler: A Child’s Guide to Parenting

“The characters jumped off and page…so fun and suspenseful, I wanted to be in the story.”

—Ophira Eisenberg, author of Screw Everyone: Sleeping My Way to Monogamy and host of NPR’s “Ask Me Another”

Naomi Elana Zener is a new writer with a fresh satirical voice. Naomi writes satire and fiction on her blog, Satirical Mama. Her vociferous blogging has been read and appreciated by industry bigwigs such as Giller Prize winner Dr. Vincent Lam and New York Times best-selling author and journalist Paula Froelick. Naomi’s articles have also been published by Erica Ehm’s Yummy Mummy Club. Naomi is currently working on her sophomore novel.