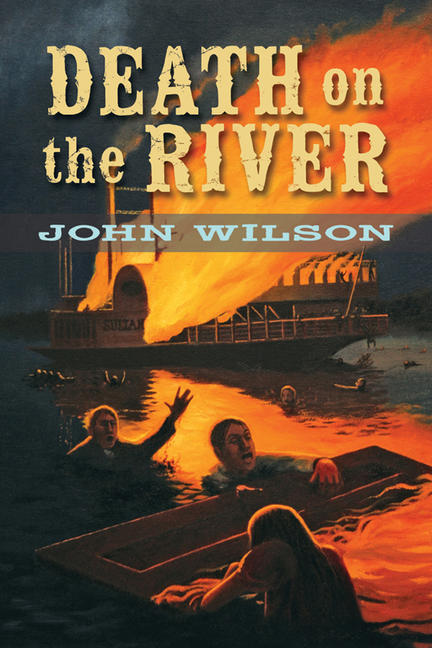 Set during the last year of the American Civil War, Death on the River portrays the grim brutality of war through the eyes of a young soldier.
After the older brother he worshipped is killed in battle, young Jake Clay joins the Union Army in the spring of 1864, determined to make his parents proud and honor his brother's death. His dreams of glory vanish, however, when he is wounded and taken prisoner in his first battle at Cold Harbor, Virginia, and confined to the Confederate prison camp at Andersonville, where 30,000 soldiers face violence, disease and starvation. Frightened and disillusioned, Jake takes up with Billy Sharp, an unscrupulous opportunist who shows him how to survive, no matter what the cost.
By the war's end Jake's sleep is haunted by the ghosts of those who have died so he could live. When the camp is liberated, Jake and Billy head north on the Mississippi riverboat Sultana, overcrowded far beyond its capacity. Unknown to Jake, the fateful journey up river will come closer to killing him than Andersonville did, but it will also provide him with his one chance at redemption.

Excerpt: Death on the River (by (author) John Wilson)

The war between the States has only been over for two months, and the roads and rivers are clogged with men traveling in all directions. Most of them will make it home one way or another. That's the easy part. It's what you bring home inside your head that's the problem.

"[An] engrossing, vivid and even horrifying read that cannons into the United States' bloody 1860s… Offer[s] some startlingly resonant moments for his adolescent audience."

"This riveting look at the Civil War's horrifying Andersonville prison through the eyes of an 18-year-old inmate has the power to shock and to compel young readers' interest while uncovering exciting history for them. Wilson doesn't shove the history down his readers' throats. He merely writes a tension-filled story packed with appalling events that really happened...This engrossing novel leaves an enduring impression."

"A well-written book that will provide the reader with an understanding [and] insight into the perils of war. The author did a fantastic job of relating the cruelties of war without making it gruesome for young readers...Recommended."

"The story does a good job of illustrating the realities of war and accurate historical details. Recommended."

"Provides a vivid picture of the horrors of the Andersonville prison camp."

"The strength of the novel is in Wilson's descriptions of both the moral and physical filth found at the prison camp. Readers feel Jake's disgust and fear."

"This book does a great job of depicting the horrors of war…The accuracy of the story is amazing, the characters are well-developed, and the plot is engaging. Readers who like historical fiction, war stories, and survival books will all enjoy reading Death on the River."

"Wilson paints an engrossing picture of the brutal life of these soldiers...Most young readers, especially boys, will be fascinated by Jakes' adventure, and will likely find it shocking to learn that anyone could endure such hell."

"[Wilson] does a great job. In fact, sometimes in Death on the River if anything it's too good an illumination. Though he (thankfully) brings little of the actual gore, we feel the horrors of war very keenly. It's a lesson it's always good to remember: one we are not able to forget."

"Illustrates very well that under circumstances like these, there are no easy, "good" choices, and it avoids casting "good" and "bad" around North/South lines...The depiction of the harsh life of a prison camp is accurate and worth a read."

"[Wilson] has captured the struggles of young soldiers faced with making impossible choices in order to survive in war…Wilson's gripping descriptions of bloody battles, abominable prison conditions, and man's inhumanity to man will capture the imagination of readers wanting to know more about the American Civil War."

"John Wilson has crafted a compelling story that seamlessly incorporates a number of key events in American history… This sense of connection with the past that Wilson's story inspires is one of the novel's strongest features. Recommended."

"Jake is a believable protagonist who matures and gains integrity by the end of the story. Perfect for reluctant readers needing a historical fiction or a novel set in the Civil War era."

"This historical coming-of-age novel is so filled with adventure that it might very well lead its young readers to search for more books on the American Civil War… Here's hoping that books like Death on the River help spawn a new generation of amateur historians."

"Teen fiction rarely gets so involved with notions of morality in war, and this is a thoughtful, provocative work."