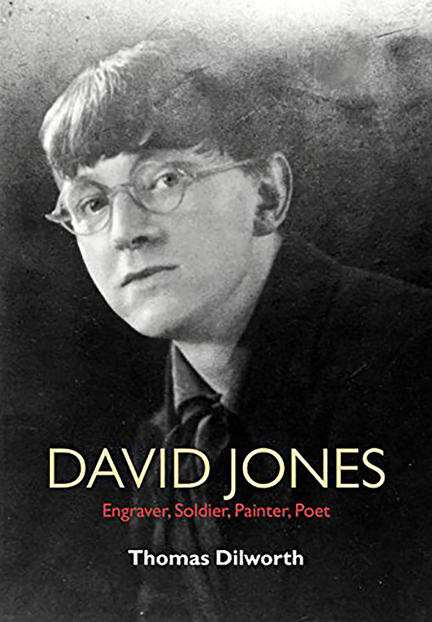 Among the revolutions of the last century, none was more important or potentially more lasting than the one in the arts called "Modernism". Among the giants of that movement were writers who changed our conceptions of poetry and prose forever. Now, well into the new century, we can look back to admire and reflect on figures from that period. Last year saw biographies of two monumental poets of Modernism: Robert Crawford's first volume on T. S. Eliot, and David Moody's concluding third volume on the life of Ezra Pound.

We are excited to announce the first full–length critical biography of the third member, too often overlooked, of that extraordinary group. The beautifully illustrated David Jones: Engraver, Soldier, Painter, Poet by Thomas Dilworth will stand for generations as the great biography this wonderful artist deserves.

Jones (1895–1974) was a painter, a wood– and copper–engraver and maker of painted inscriptions, but it was as a poet that he left his most lasting mark. Eliot called him "one of the most distinguished writers of my generation" and Dylan Thomas said he "would like to have done anything as good as David Jones has done." Auden praised his poem In Parenthesis as "the greatest book [ever] about the Great War", and The Anathemata as one of the "truly great poems in Western Literature." His work, the whole of it, enables him to stand alongside Eliot, Pound, and James Joyce as an incomparable figure in literary Modernism.

Thomas Dilworth is a Distinguished Professor at the University of Windsor, Canada and specializes in modern British and Irish literature. He is a fellow of the Royal Society of Canada. He knew David Jones personally along with Jones's closest friends, and spent thirty years researching and writing Jones's biography. He is the world's leading authority on David Jones, has edited and published several academic editions of and books on Jones' work.

Shortlisted for the Duff Cooper Prize

"While his life was hard and never entirely free of post–traumatic stress disorder, David Jones now has—thanks to Thomas Dilworth—a biography worthy of his originality and genius." —The Washington Post

"It’s ever so rarely you get a perfect biography, a marvellous match of subject and writer—but Thomas Dilworth’s biography of David Jones is just that." —Evening Standard

"An overdue biography . . . [Jones’s] achievements as a Modernist writer rank him alongside T. S. Eliot and James Joyce." —The Economist

"Lavishly illustrated and wonderfully well written... Dilworth is that rare thing: a scholar who has the capacity for great clarity." —Rachel Cooke, The Guardian

"Dilworth’s book is a splendid example of biography–making . . . Dilworth has researched his man properly; and as importantly, he has selected and shaped the fruits of his research into a gracefully written and fitly proportioned whole . . . I cannot recommend it highly enough, both as an adjunct to an appreciation of Jones’s literary and visual achievements, and as a literary achievement in its own right." —Notre Dame Review

"As Professor Dilworth makes the backgrounds of Jones's writing clearer and more comprehensible, he confirms the power, depth, and relevance of his work as a whole."
—W.S. Merwin

"Dilworth is deft at tracing two of the essential ingredients in Jones’s life and work... [A] wonderful book."" —The Spectator

“Dilworth is a brilliant describer and analyst of the art; his descriptions would make individual works vivid to the reader even if they weren’t reproduced in this richly illustrated book.” —The Guardian

“Thomas Dilworth’s welcome (and superbly produced) biography will clearly be the point of reference for Jones’s life for a long time to come.” —New Statesman

Other titles by Thomas Dilworth

The Letters of Gertrude Stein and Virgil Thomson