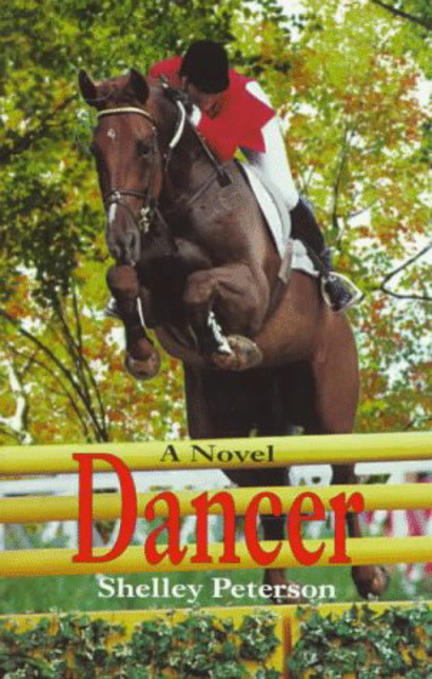 Hilary James ('Mousie') is sixteen when she wins The Fuller Trophy jumping with her horse Dancer at the Royal Winter Fair. Her triumph is rewarded with an invitation to perform in England for Queen Elizabeth, but she has also attracted the unwanted attention of the evil Samuel Owens who plots to acquire Dancer for his niece, Sara.

Thwarted in his initial attempt to purchase the horse, Owens has his hired man, Chad Smith, try to steal it. Mousie has a dream in which a beautiful blond horsewoman warns her of impending danger. She wakes to discover Chad Smith, syringe in hand, in Dancer's stall. Chad Smith is killed in the ensuing scuffle and his employer comes under suspicion.

Dancer is flown to Highgrove, the country home of Prince Charles, and Mousie arrives with her mother Christine at 'Clusters' -- an English manor, once the home of Arabella, the second wife of the Duke of Dewbury, now both long dead. Mousie finds an antique lady's hunting whip which she feels certain must have belonged to Arabella, and later discovers a portrait of her riding side-saddle. It is the same woman who appeared in Mousie's dreams.

Shelley Peterson was born in London, Ontario. She appeared there in her first theatrical production, Pinocchio, at the Grand Theatre at the age of ten. Her professional acting career began at the age of nineteen with a production of A Midsummer Night's Dream at the Neptune Theatre in Halifax. Since then she has played over a hundred roles on television, in film and on the stage.

Shelley Peterson was educated at the Banff School of Fine Arts, at Dalhousie and at the University of Western Ontario. She has had a lifelong love for animals, big and small, and horses in particular. Her trilogy of books about girls and their love affairs and adventures with horses has been enjoyed and praised.

Chapter One
The Royal

This was it. The Royal Winter Fair. Tension electrified the air. It was even scarier than Mousie had imagined, and she'd been having anxiety dreams for a week. She took a deep breath and carefully positioned her reins. Dancer quivered in anticipation. Mousie reached down to pat his sleek neck. The elegant chestnut stallion pawed the ground and nickered quietly to her, giving her courage. She mustn't, she couldn't look into the stands where her mother sat. One glance at that hopeful, loving face and Mousie knew she'd crumble into a useless heap. She was thankful that she couldn't see any faces at all through the glare of the floodlights. Mousie thought she was going to pass out.

'Get a grip,' she scolded herself through clenched teeth.

The starting whistle blew. She steeled herself. She nodded to the judge and whispered into a silky, delicately pointed ear, 'Time to get the job done, Dancer.'

'Number ninety-seven. Daring Dancer. Owned and ridden by Hilary James.' Mousie hardly heard the announcement as she and Dancer started their gentle canter into the first jump. There were so many noises from so many directions that Mousie's ears muffled everything into an indistinguishable hum. It was just the two of them alone in the enormous ring.

'Easy does it, Dancer.' Dancer set himself properly on his haunches and sprang forward. 'Yes, that's it.' They cleared the imposing oxer with inches to spare and sailed on to the next. Dancer arched his neck and held his tail proudly while Mousie judged his position and faced the next hurdle squarely. Over they went in perfect harmony, horse and rider completely synchronized.

Way up in the stands, hardly daring to breathe, sat Christine James, Mousie's mother. In her early forties, she was still attractive in her slim, refined way. She wore tan pants and brown paddock boots, with a cream turtle-neck sweater and tweed jacket, her fine dark shoulder-length hair swept off her classic features. Even though her clothes were well past their prime, they were of good quality and worn with style.

Christine watched her sixteen-year-old daughter and the young horse with wonder. Tall and lithe, pretty and bright, Mousie was a beautiful sight on her powerful mount.

Who would've believed it, she thought. Absolutely no one. Just about two years ago, with no money to spend, they'd bought this creature. He was a rebel horse. Mangy and mad, that's what they'd said about him. No one could get near him to look after his feet, and he kicked and bit. No wonder they could afford him. And look at him now. A hair's breadth from becoming a winner at the Royal Winter Fair, Canada's greatest horse show. Mousie's patience and kindness, consistent hard work and an uncanny communication with Dancer had turned him around. Christine looked in awe at her child.

Hilary had been nicknamed Mousie by her father, and the name had stuck. Auburn-haired and passionate, he'd been very close to his only child. They were soul-mates, aligned in spirit and sharing the same sense of fun. Mousie had been devastated by his death two years earlier. Peter James had been a wonderful man and a loving father. He'd been larger than life, a compassionate and generous person with a booming laugh that matched his humorous temperament.

The cancer that claimed him had also taken the light out of his daughter's eyes. Mousie had gone into a serious depression, avoiding friends and dropping all her interests. She didn't have any energy, and her teachers complained that she fell asleep at school. Her health was failing, too, because she had no interest in food. Christine had been at her wits' end trying to help her overcome her grief, until the day that crazy horse had come into their lives.

And into their lives he'd come. At a full gallop! Christine and Mousie had been out in the barn doing the chores when pounding hooves echoed louder and louder until coming to a dead stop in front of the barn. They'd run out to see what was happening. There he'd stood, head proud and unrepentant with nostrils flaring from his escape from his owner, who'd been leading him down the road to a prospective buyer. The two of them had stared at this chestnut vision, and it was then, Christine reflected, that the light had returned to Mousie's eyes.

The farmer had been overly eager to sell, and the price was suspiciously low, but Christine had asked no questions. People had warned her against buying him, and the vet was truly alarmed. But Christine knew what she was doing. Her daughter needed this horse. Heaven knew Christine didn't. It was hard enough making ends meet without the expenses of a seventeen-hand, underfed, ill-mannered, pig-headed, wormy stallion.

Christine's eyes continued to follow her daughter's brilliant ride around this very difficult course. She marvelled again at what love can do. There was no question in her mind that the strong bond between horse and rider was creating this magic.

'Any lover of horses is bound to enjoy this book; others will enjoy it as well...'

'The writer discusses a wide variety of emotional issues: adults rekindling an old flame and falling in love, the first relationships of teenagers, emotions of both adults and youth surrounding the death of a parent and loved one, to facing down issues of abuse and alcoholism. ... Peterson's rich and vivid characters and her amazingly perceptive understandings of human emotions give Dancer the extra sparkle and magic it needs to stand out above most of the rest.'

'Peterson's prose becomes self-assured in equine action scenes: the fox hunt is excitingly described and jumping events benefit from her insider's eye for detail. It is Dancer itself, strong, proud, feisty and determined, that is by far the book's most interesting character, which, of course, is the highest recommendation it can have.'

'The story has everything in it but the kitchen sink. Besides the thrills of competitions, criminals and the extraordinary horse, there's a haunted riding whip, the benevolent ghost of Hilary's dead father, teenage romance, divorce, an alcoholic ex-wife and parental romance. As I read I kept shaking my head over the naive melodrama of it all, but I also kept reading, right to the end. This book is as ingenuous as the early Nancy Drew mysteries but, like them, it's also a real page turner.'

Other titles by Shelley Peterson