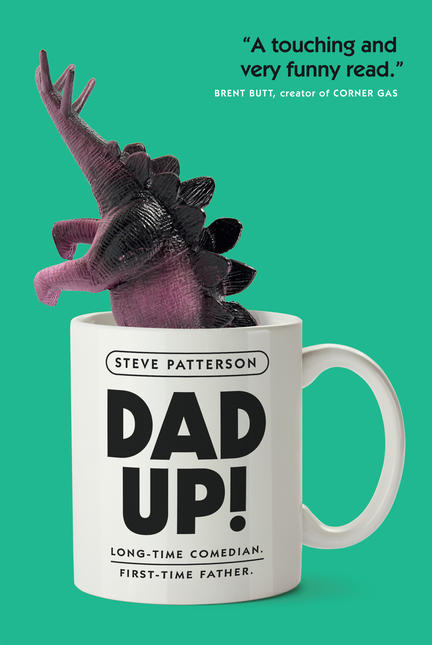 From one of the country's most beloved comedians and host of CBC Radio's incredibly popular program The Debaters comes a funny, poignant, and at times unexpectedly wise look at what it means to be a dad in this day and age.

Steve Patterson has been thinking about dad-dom for quite a while. In Dad Up! he gives his all to be the best father possible to two young girls while imparting his hard-won wisdom and insights to readers everywhere.

The youngest of five boys growing up in an Irish Catholic household, Patterson mines his childhood for any sage advice he might have picked up from his own dad. He talks with candour about the difficulty he and his wife, Nancy, had conceiving, finding humour in their experiences with the fertility clinic's automated phone calls (which Patterson calls "RoboPimp") informing them when Nancy was ovulating. He chronicles the disappointment of failing to get pregnant, only to have the miracle conception take place in Regina during Grey Cup Week, under the guiding spirit of the Saskatchewan Roughriders and comedian Brent Butt (don't ask).

From that point on, Steve Patterson assumes full dad-mode, riffing on the biohazard that is changing a diaper, the absolute futility of stuffed animals, becoming a public breastfeeding warrior in the most unexpected of places, and how growing up a little boy in no way prepares you to being a father to little girls.

Most importantly, Dad Up! charts the awesome experience of watching tiny infants that you somehow had a hand in creating evolve into confident and crafty little people, and the lessons that they teach along the way.

The host of CBC Radio's The Debaters since 2007, Steve Patterson has become a household name, with more than 700,000 listeners tuning in each week. He has performed at several of the Just for Laughs prestigious televised galas, including one hosted by Steve Martin. Considered to be the highlight of the show by the audience and critics alike, Patterson's performance prompted the legendary Martin to quip, "If I'd known he was going to be THAT good, I would have cancelled him.' In addition to his stand-up comedy and radio work, Patterson has written for several publications, including the Globe and Mail, Irish Independent, London Free Press, Toronto Star, and Canadian Living. This is his first book.

Praise for Dad Up!:

“As always, Steve Patterson finds the unusual in the natural, the unnatural in the ubiquitous, the light in the dark and the dark in the light, then twists the whole mess into wonderfully crafted comedy that captures the weirdness that’s inherent in being human. This book is a touching and very funny read. At least up to the chapter in which he mentions me. I stopped reading after that.”
—Brent Butt, creator of Corner Gas

“This book should come with a ‘READ BEFORE PARENTING’ sticker. It won’t teach you how NOT to get punched in the testicles, but you will gain a mother-load of hilarious insights into fatherhood that superhero mums everywhere will be grateful you learned."
—Denise Donlan, broadcast executive and author of Fearless as Possible (Under the Circumstances)
“As parents, we all start out flying blind, and we all wind up writing our own guide books. Happily, Steve Patterson has actually put pen to paper and shared his. It is honest, warm, poignant….and of course it’s funny. Dads, you will recognize yourselves here. Also, learning that, as a boy, Steve thought it would be a good idea to ski off the roof of his family home explains a lot . . .”
—Stephen Brunt, bestselling author of Searching for Bobby Orr

“Dad Up! confirms many of my previously held theories about Steve Patterson: funny guy, great storyteller, and as host of ‘The Debaters’ a person who can make quite a convincing argument for conceiving your child at a Grey Cup Party.”
—Jay Ornait, bestselling author of Anchorboy and host of TSN’s “SC With Jay Onrait”

“If you were hoping Steve Patterson’s Dad Up! would make you howl with laughter, well your wish will be granted page by page. But you may not have expected his reflections on parenthood to be so thoughtful, moving, even wise. The best of both worlds. Powerful prose from a very funny rookie Dad.”
—Terry Fallis, two-time winner of the Stephen Leacock Medal for Humour

“Steve Patterson’s Dad Up! is the father’s manual this world needs. It’s a hilarious, tender account of bringing tiny humans into the world, keeping them alive, and becoming more alive in the process. Prepare to soil your diapers.​”
—Elizabeth Renzetti, journalist and author of Shrewed: A Wry and Closely Observed Look at the Lives of Women and Girls and Based on a True Story

“Thumbs up for Steve Patterson’s Dad Up! It’s a wise and humorous guide to the pitfalls, pratfalls, joy and terror of the most rewarding job that many of us will ever have.”
—Chris Cuthbert, Rogers Sportsnet

Other titles by Steve Patterson

Book of Letters I Didn't Know Where to Send

The Book of Letters I Didn't Know Where to Send

The Book of Letters I Didn't Know Where