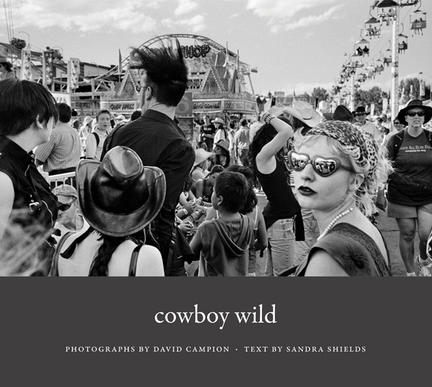 Love it or hate it, the Calgary Stampede is a place where myth, history and spectacle collide. 100 years after an American vaudeville cowboy first dreamed it up, the Stampede remains an unrivalled homage to the West.

Cowboy Wild was more than a decade in the making. Photographer David Campion roamed the world’s biggest Wild West show and brought back a collection of images that speak to our fascination with the cowboy. With wry humour, these photographs pull back the curtain and probe the contradictions that lie at the heart of a myth that transforms history into a story about the triumph of man over nature, nostalgically regretted even as it is celebrated.

As the Stampede marks its 100th anniversary, the time is ripe for a book that goes beyond the hype. In the accompanying essay, writer Sandra Shields uses the prism of the Stampede to offer a meditation on the meaning of the West and its enduring hold on our collective imagination.

David Campion came of age in apartheid South Africa, an experience that gave him a distrust of dominant social mythologies. His work wrestles with notions of power and the means by which it perpetuates itself. His photographs regularly show in galleries and public institutions.

David and Sandra previously collaborated on Where Fire Speaks: A Visit with the Himba (Arsenal Pulp, 2002), which won the BC Book Prize for Nonfiction and The Company of Others: Stories of Belonging (Arsenal Pulp, 2005).

Sandra Shields is the author, with her photographer husband David Campion, of Where Fire Speaks: A Visit with the Himba (winner of the Hubert Evans Non-Fiction Prize) and The Company of Others: Stories of Belonging. She met David in South Africa; they married a year later, and have collaborated for over a decade. Sandra has written for publications including Geist and The Globe and Mail, and has contributed to several anthologies. The story about the relationship Sandra shares with her severely disabled younger brother received a National Media Award from the Canadian Association for Community Living. She lives in Deroche, BC.

Other titles by David Campion

The Company of Others

A Visit With the Himba

Other titles by Sandra Shields

The Company of Others

A Visit With the Himba