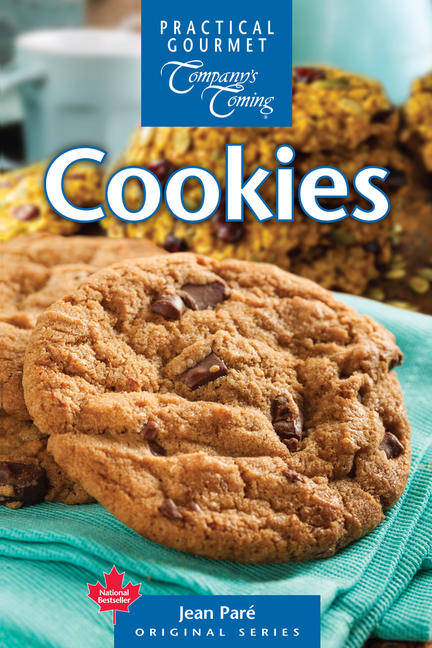 This timeless bestseller is now available with an updated look. Everyone loves cookies, which means this classic cookbook is sure to be pulled again and again from your kitchen shelves. Children of all ages will enjoy the wide variety of over 200 recipes for rolling, slicing, baking, icing or decorating cookies. For community events like bake sales, lunch box treats, after-school snacks, or for any festive occasion, you'll find a cookie recipe to suit every need, every taste, every age and every time of year.

The Jean Paré Story - Since 1981, Albertans have shared their love of Jean Paré (pronounced "PAIR-ee") and her crowd-pleasing recipes with the world. For eighteen years before that, Jean Paré earned a place in the hearts of her fellow townspeople in small-town Vermilion, Alberta, as the caterer who was most often asked: "Jean, will you handle it?"From 1963 until her first cookbook was published in 1981, catering filled Jean's schedule. Operating from her home kitchen, she made a practice of always offering a wider selection of dishes than was expected by her customers. With the help of many hands and long lists, Jean could serve over a thousand people a hot roast beef dinner within 20 minutes.The inspiration for Jean Paré to create the Company's Coming cookbook series came to her from the empty plates that followed every catering function, coupled with an outpouring of requests for her recipes. April 14, 1981, marked the debut of 150 Delicious Squares, the first Company's Coming cookbook in what would soon become Canada's most popular cookbook series. As the creative force behind the series, Jean released a new title each year for the first six years. The pace quickened and now at least eight or more are published each year.Sincerity and trust come through in every one of Jean's recipes. Today, as an internationally acclaimed cookbook author, she takes the time to personally answer every one of the many letters she receives from followers around the world. On radio interview programs, switchboards light up with calls from well-wishers and questions from people who have faith in her answers.Jean's positive attitude, warm personality, and impressive record of accomplishments made her a perfect role model during her catering days, and now continue to keep her in high regard as Canada's most popular cookbook author. So what do people really think of a lady who has sold over 30 million cookbooks? In short, people can relate to the small-town homemaker who went on to fame and fortune without compromising her values or her good taste.To learn more about Jean's life, check out her biography, Jean Paré: An Appetite for Life.Company’s Coming’s Jean Paré has Retired after 30 Years and 30 Million Books. To learn more, visit our Media News page.Personal Accomplishments 1990/91 - Entrepreneur of the Year Award 1992 - Pinnacle Award 1996 - Global's Woman of Vision Award 1997 - YWCA Women of Distinction Award 2003 - Queen Elizabeth Golden Jubilee Medal 2004 - Junior Achievement Alberta Business Hall of Fame 2004 - Member of the Order of Canada 2004 - Pharmasave's Remarkable Woman Award 2004 - Growing Alberta Distinguished Service Award 2005 - Rotary Integrity Award 2005 - Alberta Centennial Medal 2005 - Canadian Sales Hall of Fame

“Company’s Coming, if you need a reminder, is a genuine Alberta success story...Company’s Coming has sold over 27 million cookbooks since founder Jean Pare published her first book, 150 Delicious Squares, in 1981.”

Other titles by Jean Pare

Pressure Cooking for the Instant One Pot