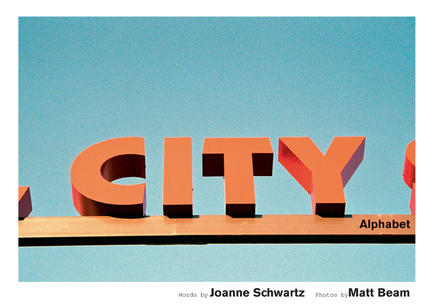 The urban landscape is alive with words. You only have to look to find them -- bold, brassy and obvious, or hidden, secret and mysterious. It's this intriguing aspect of the city that Matt Beam has captured in his photographs - words spray-painted on walls, etched in concrete, carved into wood, stuck onto glass. He and Joanne Schwartz have collaborated to create a visually arresting alphabet book that documents the random occurrences of language all around us.

The result is an edgy catalogue of words from "art" to "zoo" that inspires us all to look more closely. This beautifully designed book is a small treasure for those who love to explore and engage with the city in which they live.

Joanne Schwartz was born in Cape Breton, Nova Scotia. Her first picture book, Our Corner Grocery Store, illustrated by Laura Beingessner, was nominated for the Marilyn Baillie Picture Book Award. Her other books include City Alphabet and City Numbers, with photos by Matt Beam, and two Inuit folktales with Cape Dorset elder Qaunaq Mikkigak — The Legend of the Fog, illustrated by Danny Christopher, and Grandmother Ptarmigan, illustrated by Qin Leng. Joanne has been a children’s librarian for more than twenty-five years. She lives in Toronto.

Matt Beam is a writer, photographer and teacher. His young adult novels, published in Canada and the U.S., include Can You Spell Revolution?, Earth To Nathan Blue and Last December. City Alphabet, with words by Joanne Schwartz, was his first photographic picture book. He lives in downtown Toronto.

Most inspiring [about this book] is the potential for youngsters to use this urban alphabet as motivation to go out and find words where they live, discuss their purpose, and hear their own city speaking to them.

...sophisticated...[City Alphabet is] an intriguing, eclectic selection that may encourage young people to notice the printed words that appear in unexpected urban places...

...artfully constructed...fascinating...It will certainly have readers seeing their own cities with new eyes.

...sophisticated...Beam's photographs will be appreciated for their found art quality, and Schwartz's words for their originality...

...[The photographs in City Alphabet are] meditations on the idea that, in the city, words are everywhere, the opening salvos in ongoing conversations...Stark, metallic and urban, these images may encourage children to think about alternate ways of seeing their surroundings

Here future urban enthusiasts can discover how words exist in the spaces around them, what words can do in 26 different fonts...The book is, first and foremost, a pictorial work about Toronto that will appeal to anyone who loves this city in lots of little ways.

Words are on the street everywhere you look. These photos snapped on Toronto streets show words from “art” to “zoo” spray-painted on walls, etched on concrete, carved in wood and stuck on glass. This book captures the language found in everyday places and spaces and inspires us to look closely at our surroundings.

Other titles by Joanne Schwartz

Other titles by Matt Beam

Can You Spell Revolution

Getting To First Base With Danalda Chase