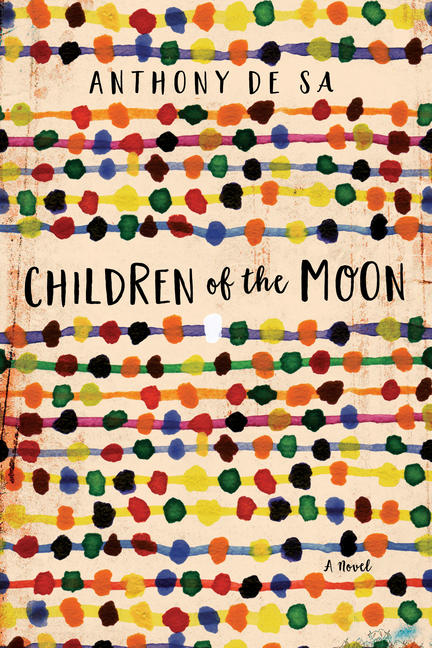 From celebrated author Anthony De Sa comes a raw and compelling novel of love, war and the heartbreaking effects of memory.

"'You must listen to my words. You must promise to tell my story the way I have shared it with you.'"

Tanzania, 1956. A Maasai woman gives birth to a child with albinism. The child is seen as a curse upon her tribe, and so begins Pó's tumultuous story. As Pó navigates the world, she must claim her life in the face of violence and ostracism.

Further south, in Portuguese-controlled Mozambique, Ezequiel struggles for acceptance too. Adopted by missionaries, he is not recognized by his Portuguese father's community, or by his Makonde mother's tribe. When civil war erupts, he must choose who to fight for and who to leave behind.

Pó and Zeca come together in a time of momentous change. Love connects these two outsiders, forcing them to confront the shattering impact of colonialism and war. Children of the Moon is a stunning and unforgettable exploration of the love of two people at once bound and separated by forces beyond their control.

Anthony De Sa, author of the story collection Barnacle Love, grew up in Toronto’s Portuguese community. He graduated from University of Toronto, did his postgraduate work at Queen’s University, and attended the Humber School for Writers and Ryerson University. He lives in Toronto with his wife and three boys. This is his first novel. His website is www.anthonydesa.com.

Excerpt: Children of the Moon (by (author) Anthony De Sa)

Standing in the shadow of my balcony, I look beyond the hotel grounds to where the brown mouth of the Buzi River meets the Beira harbour, then out, out towards the open sea.

“I was born near the mountain of two peaks. White men called it Kilimanjaro.”

Serafim sits in a chair in my room and listens to my words. He is a journalist from Brazil, sent here, to Beira, to record my story for National Geographic. I know very little about him, except that I am comforted by the scritch-scratch of his pencil on paper and the crinkles around his eyes.

“My people, the Maasai, have always called that place Oldoinyo Oibor—White Mountain. They say the snowy peak, Kibo, is the house where all gods live.”

“Do you believe in God?” Serafim asks.

“There are no gods left. They have been driven off the moun­tain. If they ever were there.”

I turn slightly because I am curious to see his reaction. His face is down, looking at his hand move his pencil over paper. He is fifty—a solid man, his body strong and straight, his once-compact frame still visible under a layer of fat. His hair, the colour of warm sand, is parted on the side. Grease tames it into waves. His brown eyes are set close together and float above his small nose, made smaller by his bushy moustache. He needs a shave.

Serafim adjusts himself on the chair, the same chair he has been sitting on during this past week, ever since he arrived. He sat patiently, interviewing those I had invited to speak to him. They were mostly women and children, the men unwilling to trust an outsider and reluctant to share their stories of fear with another man.

Serafim clears his throat. He pinches the cigarette that rests in the ashtray and draws in the smoke. It comes out his nose in two streams that slow, then curl together.

“Is that why you are here? Looking for gods?” It is too late to soften the edges of my words, but I know he does not care whether I believe in God. That’s not why he’s here.

In the past, journalists like Serafim had travelled great dis­tances to meet me. They talked of the bigger world and how it was hungry to hear of my work. They brought food and school sup­plies for the children, and so I welcomed them. They promised my story would help end the threat faced by people like me. Their letters were thin and tilted forward as if they were being pushed from behind. I call them scribblers, because I once allowed myself to love a man who scribbled down his thoughts.

“I’ve startled you,” Serafim says, packing his things. “I guess today’s interview didn’t get off to a very good start.” I hear his satchel snap shut.

I adjust my eyeglasses. When I turn around, to lean against the balcony railing, Serafim is already standing near the door, his bag slung across one shoulder and pressed flat against his thigh. He moves to drop his cigarette in the hallway, but catches him­self, and instead bends down to douse it in a small puddle by the wall. His hands are always clean. His nails trimmed. He tucks the cigarette butt into his pocket. This man cares about the world.

“I can come back tomorrow. Or Sunday, if you like. When you have more time. If you’ll allow me, that is.”

I catch his scent—warm clove and curing tobacco. I close my eyes and my toes clench. I loosen my shawl. “Let me speak.”

“Please,” Serafim says, and there is such urgency in his voice that I want to weep.

“There is nothing worse in this world than to be silenced,” I say, and Serafim’s body relaxes against the door jamb. “Except, perhaps, being forgotten.”

Other journalists have come before him looking for facts. I have given them what they have asked, only to never hear from them again. I was left feeling used and empty. No more. I am grateful I have hunted down words over the years so that I can begin to construct a story—a story that is my own.

“People tell me I was born in 1956, or close to it. I do not disagree, but it means nothing to me. This is what I know. I grew up on the grasslands of Tanganyika, before the land became Tanzania. My people did not care about Europeans or the names they gave things. They drew lines wherever they wanted and claimed what wasn’t theirs. The Maasai are a proud people. We kept ourselves alive. The foreigners had all heard our story.”

“How the God, Enkai, sent the cattle to our people down a long rope between heaven and earth.”

The ocean breeze blows through my window, a distant smell of the salty monsoon sea and charcoal fires.

“We had been given everything. Until one of us tried to demand more from Enkai. He got angry and cut that rope. But you don’t need to know all this.”

“Please, continue. I want to hear it.”

Over and over I have rehearsed how I would tell this story. But this is the first time I have heard my words. I have to push past my uncertainty. “We were sent out of the garden, climbed up from a crater bounded on all sides by a steep cliff. The red dust clung to our skin. We survived the sun and dry lands for countless moons, herding our beasts along the great river they call Nile, walking by the rim of Enkai’s angry gash in the earth they also named, Great Rift Valley. You see, the white man has always wanted to tell our story—to name things. The Maasai had nothing they could take. They feared us as warriors—they could not possess us and sell us to foreign lands. And for these reasons they left us alone.”

I look over my balcony once again, out across the hotel grounds. Small fires are everywhere. A man has caught some pigeons and is plucking them. Some children are bathing in the stagnant water that has collected in the deep end of the pool. They do so under the bright red light that pulsates from the Coca-Cola machine. It was delivered to that spot, set up against what once was the cabana wall, shortly after the Africa Cup of Nations in 2013. They ran wires to connect that one machine. I have never seen anyone buy anything from it. It accepts nothing but South African rand. This building I live in was once called the Grande Hotel, but its rich guests haven’t walked these ruined halls for years. In 1974 the Portuguese soldiers who fought the last days of the War of Independence returned to Portugal and the hotel was left in ruins. As soon as we had taken back our land we entered a war amongst our­selves. Another twenty years of bloodshed, but those soldiers had no need for the hotel. It is now home to over two thousand people. There is no running water and no electricity. The city’s politicians leave us alone. They know if you poke a stick into an anthill, the ants scurry about, clean up the mess and strengthen things, as if erasing the action. With its many ghosts we share the hotel and drink leaking rainwater. Elevator shafts have become dark throats that swallow our waste, and at least once a year a child falls in and is lost to us. The war has scarred this place. Serafim can see that for himself.

“Here we are all broken—the lame, the poor, refugees, and albinos like me. We each have found a place. People with albi­nism have taken over Block B of the hotel. Here in Mozambique we are misunderstood. We are attacked, killed. Our body parts are sold to men who call themselves healers for use in charms and magical potions. But you have heard this.”

“Do you ever think of going back to the place you were born? Would you be safe there?” From the strength of his voice I know he has returned to the chair I set out for him.

“We are called zeru zerus there. It means we are nothing. Here, the people call me a branca. Albinos who do not belong to others have come here because they have heard of this place, and of me. I have no special magic, but I cannot convince them.”

Lulled by the sound of Serafim scratching his notes, I con­tinue. What comes through the gate of my mouth is carefully selected.

“If there is a god, the one my ancestors called Enkai, I have seen its face in three women. These were the strong ones who never feared my touch. Namunyak, my birth mother, gave me life and a name. She would not live long enough to see me laugh or play or take my first steps. Simu, my mother’s sister, took me in and nurtured a place of love in me so that I would not grow into a bitter root. Fatima, the last of the three women, she christened me Pó, the Portuguese word for pow­der. ‘A fitting name for a beautiful girl like you,’ she said.”

Serafim looks up from his notebook. His face glows.

“I have also seen the face of god in one man,” I say. “Ezequiel. He kept a harmonica in his pocket, an extra pair of boots over his shoulder, and a rifle across his back. He declared his love for me with a gift. And later he gave me another.” I catch my breath. “Because of Zeca, I can see things as Enkai had intended.” I remember thinking, This is the way the world is. This is the way the world was meant to be.

Other titles by Anthony De Sa