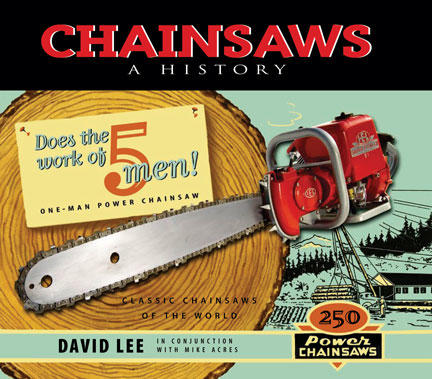 “It rips, and cuts, it makes a horrible racket—a chainsaw is a frightening thing. I write not to glorify its terrible power but to acknowledge its place in the most sweeping revolution that technology has wrought in the 20th century—the revolution of individual empowerment.”

So begins author David Lee in this first-ever book on the worldwide history of the chainsaw, an invention that transformed the forest industry and eventually became the indispensable companion of every red-blooded country dweller. Chainsaws, it turns out, have a curious history and since the 19th century they have taken on many forms. From 600-pound steam-powered behemoths to gas chainsaws mounted on wheeled carriages to diesel chainsaws and electric chainsaws with portable generators, this book musters a curious collection of contraptions and inventors the like of which we haven’t seen since Those Magnificent Men in Their Flying Machines. Carefully tracing the evolutionary threads of countless short-lived pioneer devices, author Lee, working together with a worldwide network of chainsaw buffs, traces the roaring, woodchip-and-oil-sprayed progress of what is now a lightweight modern machine that holds a place of honour in the world's woodsheds.

Chainsaws is a handsome gift book full of wonderful old and new photos along with priceless chainsaw ephemera that will warm the heart of anyone who's ever held a power tool. From Andreas Stihl’s Black Forest experiments to Vancouver’s booming WWII chainsaw industry, to the postwar race to develop one-man saws, the rise and fall of Canada's proud Pioneer brand, and the late entry into the field of the centuries-old arms manufacturer Husqvarna, it examines why the chainsaw is no good for massacres (in Texas or elsewhere), and why it is unlikely to be replaced by any new high-tech inventions such as lasers.

David Lee was born and raised in Mission, BC. Upon receiving his BA in English from UBC, he moved to Toronto where he worked for the jazz magazine Coda and, with his wife, Maureen Cochrane, ran the publishing house Nightwood Editions. He also studied double bass and worked actively in Toronto avant-garde theatre, dance, and multi-media performances, as well as touring internationally and recording with the Bill Smith Ensemble, Leo Smith, and Joe McPhee. Moving back to the west coast, he played in community bands, co-founded the Pender Harbour Jazz Festival, wrote a Vancouver Island guidebook, and co-authored the autobiography of jazz pianist Paul Bley, Stopping Time. David Lee received his MA in Music Criticism from McMaster University in 2004 and currently lives with his family in Hamilton, Ontario.

"In the story of the ongoing struggle between man and nature (not to mention between man and man), the chainsaw makes for a surprisingly colourful chapter."
--Stephen Knight, Quill & Quire

This book traces the development and evolution of the chainsaw. From its humble beginnings when it required four operators and used steam, the chainsaw’s technological advancement is chronicled to the single-operator machine of today. The book goes behind the scenes to look at the inventors of the chainsaw, their struggles to obtain acceptance from the loggers and eventually to their success as multinational companies. It also includes hundreds of black and white and colour photographs, complete with descriptors, hand drawings, a detailed timeline and interesting factoids throughout.

Lee also wrote Four-Wheeling on Southern Vancouver Island and The Battle of the Five Spot.

Other titles by David Lee