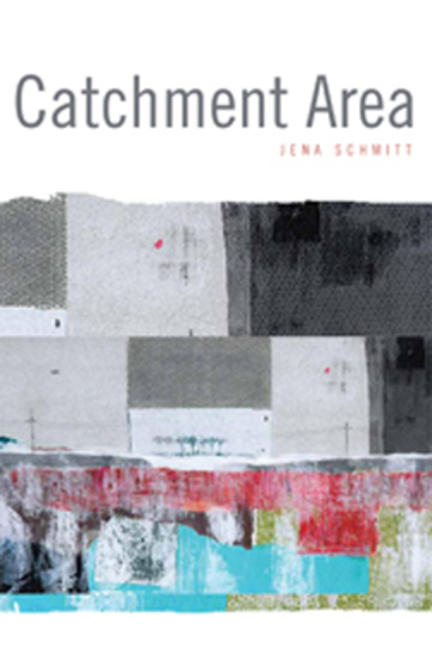 Like a geographic catchment area, this debut collection by Jena Schmitt draws together influences from poetry, prose, biography, art, architecture and history into a perceptive study of the forces that shape our physical and emotional landscapes. In a voice that is subtle yet distinctly confident, Schmitt describes how at times these forces are quiet as “sleet that turns to rain/ that turns to snow,” and at times unyielding as a child who throws himself down in a tantrum.

Catchment Area captures glimmers of that instance when, just as we are about to define the emergent terrain, just when variables such as an earring or glove could solve “any number of unknowns,” the earth shifts—whether due to memory, relationships, natural disasters or war—leaving an absence that cannot be mapped.

These poems call on the reader’s own sense of this absence and how it impels us to search for meaning in a world of constant change, where each time we turn on the news we are witness to earthquakes and floods, or suburban homes turned into methamphetamine factories and bronze statues stolen from parks. And so we are brought to a place of possibility, a place to “revel in/ the parts that are/ missing: heart and mind/ like phantom limbs.” Schmitt reveals the watershed point at which each of us stands, where we can go this way or that, where the struggle for articulation and understanding forms our own personal topographies.

Jena Schmitt grew up in Sault Ste. Marie, Ontario, and moved to Toronto to study creative writing and English at York University. Since graduating, she has worked as a freelance writer and editor for various Canadian publications. Her poetry has appeared in The Fiddlehead, The Malahat Review, The Antigonish Review, Prairie Fire and Grain, and her writing has received support from the Toronto and Ontario arts councils as well as the Canada Council for the Arts. In 2008, she participated in the Banff Centre for the Arts Writing Studio. Two years ago she moved back to Sault Ste. Marie, where she lives with her husband and their one-year-old son. Catchment Area is her first book.

Portrait of the Heavy-Hearted in March

These days are greyer than grey, lightless every time we turn our backs away. Only the culprits remain:

the profile of a deadened sun against the sky’s endless list, its grand, sweeping judgements. March is difficult

to take, impossible to change, like bad news or the truth, and sometimes expects— no—needs more of the same. One last

hail followed by snow and freezing rain. And so the heavy-hearted cannot help but make their way from Point B

back to Point A, umbrellas snapping open like lilies or the promise thereof. A meagre offering, gifts to the gods above.

“Jena Schmitt, whose first published poem appears in The Fiddlehead, takes the Don't Stop A-Rockin' prize for her elegant, unusual 'Quiescence,' a neurotically beautiful examination of the ways in which 'meanings . . . change without notice.'”

—The Globe and Mail