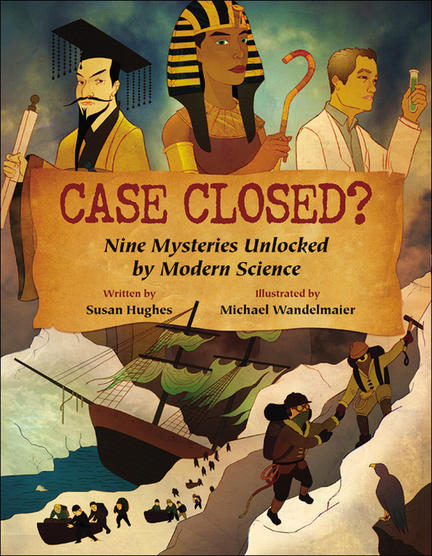 Egypt's first female pharaoh disappears around 1457 BCE --- was she murdered? Find out how DNA closes the case. The ancient Arabian Peninsula city of Ubar vanishes, seemingly without trace. Find out how old maps and modern space shuttles help solve the mystery. Sir John Franklin's 1845 expedition to find the Northwest Passage is never heard from again. Find out how spectroscopy points to some probable explanations.

Case Closed? examines these and six other mysteries from ancient and modern times. Accompanied by photos, maps, diagrams and illustrations, this book reveals how modern science sheds new light on people, vessels and entire civilizations throughout history that simply vanished. In some cases, the mystery has been solved. In other cases, readers can examine the latest evidence and decide for themselves.

Susan Hughes studied English literature at the University of Toronto. She writes both fiction and non-fiction children's books. She lives with her family in Toronto.

Michael Wandelmaier is an illustrator and graphic designer who uses both traditional and digital media in his work. He is the illustrator of Case Closed? Michael lives in Toronto, Ontario.

Here is another original take on a subject — specifically, some well-known historical events that have baffled historians and researchers. Each of the nine chapters describes a great mystery and tells us how scientific tools and research are, in some cases, able to provide definitive answers about what happened. These mysteries span the globe and take the reader from ancient Egypt to the twentieth century. A CAT scan helps an archaeologist determine if an unknown mummy is the missing female pharaoh, Hatshepsut. A filmmaker and a NASA scientist search for a missing Arabian city using the space shuttle. Scientists were able to find large traces of lead in the bodies of three of the men travelling in Franklin’s expedition, suggesting that lead poisoning was responsible for their deaths. And what book of historical mysteries would be complete without the Russian princess, Anastasia? With DNA testing, there is now scientific proof that Anastasia was murdered with the rest of her family in 1918. These are just some of the mysteries that modern science has probed.

Each chapter begins with a brief outline of the question, and is followed by a synopsis of the lost person or place. We then move to “Case Open” and follow the scientists through their process of discovery. There are useful little area maps, drawings and photographs, all nicely laid out. The science is made accessible to a young reader in the interesting and well-written text. It would also work as a read-aloud to prompt discussion in science, technology or history classes. There is detailed index and brief glossary of scientific terms.

In each of these nine mysteries, readers get the opportunity to read the historical file on the case, meet investigators from various scientific backgrounds who are researching each mystery and study the tools and techniques they have at their disposal. As modern science sheds new light on each mystery from ancient to modern times, readers will learn whether these scientific detectives can finally declare — CASE CLOSED!

Other titles by Susan Hughes

Off to Class (updated edition)

Incredible and Unusual Schools Around the World

The Science of How Light Works

How One Boy Stood Up for Gender Equality

The Science of How Sound Works

Carmen and the House That Gaudí Built

Walking in the City with Jane

A Story of Jane Jacobs