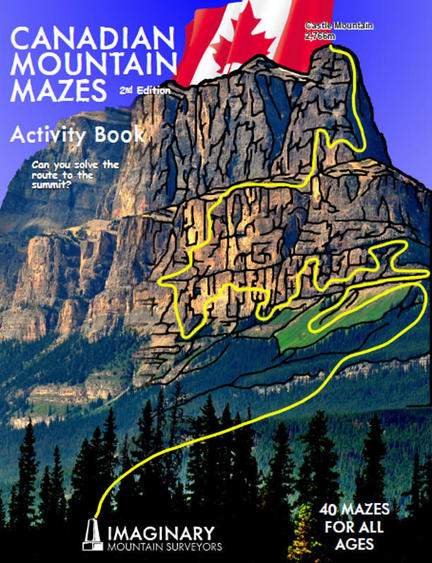 40 prominent Canadian peaks, from north to south, east to west, all turned into mazes. Start at the obelisk and find the path to the top and touch the flag. This book opens the world of mountain up to children and the young at heart, learning the locations and height, and with the solutions often following actual routes, and always the structure of the mountain. The centre spread is a two-page maze of Canada's highest and the world's largest - Mt. Logan.

Dustin Lynx hiked the 4300 kilometre Pacific Crest Trail, from Mexico to Canada, in 1994. Shortly afterward, while looking through antiquarian bookstores in Vancouver and longing to be back on the trail, he came across High Summer: Backpacking the Canadian Rockies by Chris Townsend. This book, more than any other, changed his life. Thanks to that book, he discovered the Great Divide Trail and moved to the University of Calgary so that he could hike it in 1996 between the final two years of his arts degree. That hike led to a life-long enchantment with the Rocky Mountains and eventually to his calling it home with his new family. He currently operates an IT consultancy and an award-winning publishing company called Imaginary Mountain Surveyors. Besides the third edition of this guidebook, Dustin has written for several magazines including Explore and contributed to the literary anthology, Imagine this Valley: Essays and Stories Celebrating the Bow Valley (RMB, 2016). He lives in Canmore, Alberta.

Jerry Auld’s short stories have been published in the Alpinist and in the Canadian Alpine Journal. He is a graduate of the University of Calgary and an alumnus of the Banff Writing Studio, where he worked under the direction of Michael Helm and Paul Quarrington. At the 2005 Banff Mountain Film Festival, Jerry was the co-recipient of the 2005 People’s Choice Award for the independent film Sister Extreme. Jerry’s knowledge of the mountains comes from full-time work on the trail crew for Kananaskis Country in the Alberta Rockies, as well as at the Banff Centre, Parks Canada, and the Banff Lodging Company. He is currently a self-employed consultant in website development and programming. Hooker & Brown is his first novel.

Other titles by Dustin Lynx

Other titles by Jerry Auld

A Jazz Guide to Banff