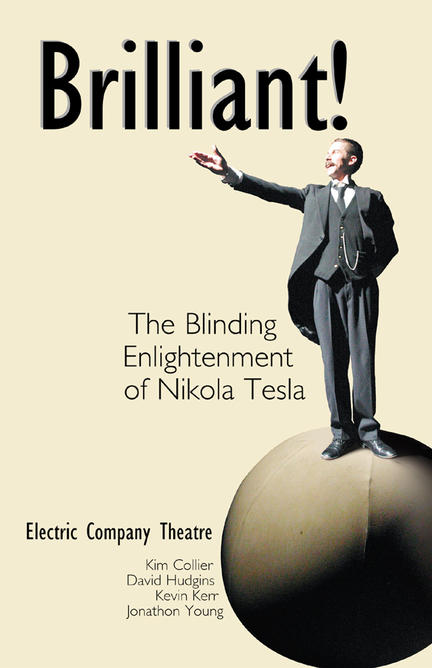 Chronicling the explosive career of a twentieth-century genius, Brilliant! is a story about the beginning of our technological age embodied in a man whose ideas, dreams and passions were too big for his own time. Visually stunning, the play has many comic, surreal and dramatic moments told in the inimitable style that has made the Electric Company a Canadian treasure.

In February 1882, Tesla discovered the rotating magnetic field, a fundamental principle in physics and the basis of nearly all devices that use alternating current. His greatest achievement is the polyphase alternating current system, which today lights the entire globe.

His alternating current induction motor is considered one of the ten greatest discoveries of all time. Among his other discoveries are the fluorescent light, the laser beam, wireless communications, wireless transmission of electrical energy, remote control, robotics, and vertical take-off aircraft. He is the father of radio and television, and registered over seven hundred patents worldwide. His vision included exploration of solar energy and the power of the sea. He foresaw interplanetary communications and satellites.

Brilliant! explores the enigma of a man who had a vision of bettering the world for humanity, yet whose relationships with others were strained; whose inventions literally outshone his those of his mentor (and later, his rival) Thomas Edison, yet whose name lingers far below Edison's in history books; whose unconventional approach to problems made him a pioneer in many fields and earned millions of dollars for others, yet whose ultimately tragic life ended penniless. Who was Brilliant!

The Electric Company was switched on in 1996 and have quickly gained a following for their unique aesthetic and sense of play that has been surprising and thrilling audiences across Canada and abroad. In 2001, the Electric Company received the single largest cash award in Canada for the creation of a new work. The Alcan Performing Arts Award was a $50,000 endorsement of the excitement surrounding the company.

With forty-six nominations since its inception, Electric Company has won twenty-four Jessie Awards including four for best production, two for original script, and others in direction, design, acting, and artistic achievement. Kevin Kerr won the 2002 Governor General’s Award for Drama for Unity, 1918. The Electric Company is based in Vancouver. Please visit www.electriccompanytheatre.com.