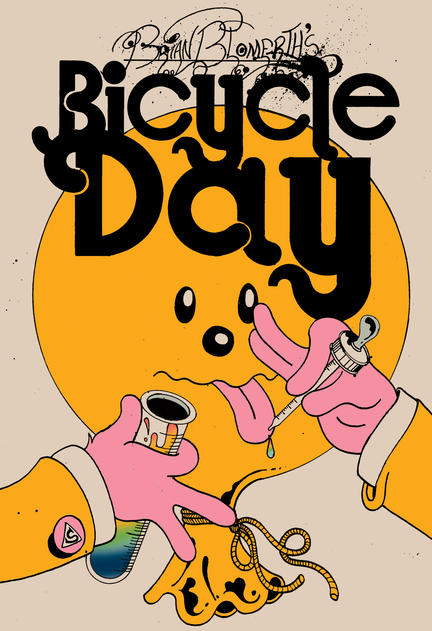 Illustrator, musician and self-described “comic stripper” Brian Blomerth has spent years combining classic underground art styles with his bitingly irreverent visual wit in zines, comics, and album covers. With Brian Blomerth’s Bicycle Day, the artist has produced his most ambitious work to date: a historical account of the events of April 19, 1943, when Swiss chemist Albert Hofmann ingested an experimental dose of a new compound known as lysergic acid diethylamide and embarked on the world’s first acid trip. Combining an extraordinary true story told in journalistic detail with the artist’s gritty, timelessly Technicolor comix style, Brian Blomerth’s Bicycle Day is a testament to mind expansion and a stunningly original visual history.

Brian Blomerth is an illustrator, cartoonist and musician based in Brooklyn. His previous publications—released via Anthology Editions, Tan & Loose, and through his own Pupsintrouble Press—include the zines Xak's Wax, iPhone 64: A User's Guide, and Hypermaze. A veteran of the underground music and arts scene whose work has graced numerous album covers, Blomerth also produces comics which appear weekly in Vice and Merry Jane.

Dennis McKenna is a renowned ethnopharmacologist and author. Since the 1970s, he has been a leading thinker on and advocate for the study and responsible use of psychedelics. Along with his brother Terence, McKenna co-authored 1975’s The Invisible Landscape, perhaps the seminal text on hallucinogenic drugs. A founding board member of the Heffter Research Institute and an advisor and lecturer for numerous other scientific organizations, McKenna has been an authoritative voice on plant hallucinogens for more than four decades. His most recent book The Brotherhood of the Screaming Abyss, a memoir of his journeys with his late brother, was published in 2012.

Combining the extraordinary true story of the discovery of LSD with the artist’s own whimsically gritty and timeless comic style, the book offers an engaging, Technicolor adventure filled with carefully researched bits of information. - Metal Magazine (6/19/2019)

Blomerth details the entire psychedelic saga with ebullient art and accurate historical details. Plus, there’s no page numbers, which imbibes the book with this hypnagogic feel. You can breeze right through it, or get stuck on a single spread for a few hours. It'll dose your peepers vicariously! -Merry Jane 8/26/2019

Combining the extraordinary true story of the discovery of LSD with the artist’s own whimsically gritty and timeless comic style, the book offers a charming, Technicolor adventure filled with painstakingly-researched tidbits of information, and the artist’s signature dog/human hybrid characters narrating every page. -Creative Boom (5/7/2019)