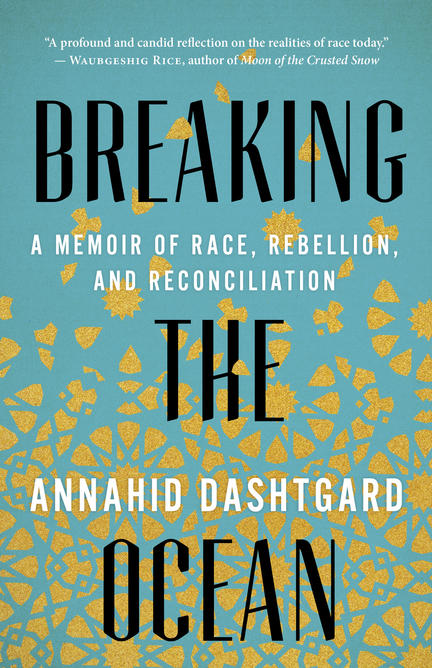 In Breaking the Ocean, diversity and inclusion specialist Annahid Dashtgard addresses the long-term impacts of exile, immigration, and racism by offering a vulnerable, deeply personal account of her life and work.

Annahid Dashtgard was born into a supportive mixed-race family in 1970s Iran. Then came the 1979 Revolution, which ushered in a powerful and orthodox religious regime. Her family was forced to flee their homeland, immigrating to a small town in Alberta, Canada. As a young girl, Dashtgard was bullied, shunned, and ostracized both by her peers at school and adults in the community. Home offered little respite, with her parents embroiled in their own struggles, exposing the sharp contrasts between her British mother and Persian father.

Determined to break free from her past, Dashtgard created a new identity for herself as a driven young woman who found strength through political activism, eventually becoming a leader in the anti–corporate globalization movement of the late 1990s. But her unhealed trauma was re-activated following the 9/11 terrorist attacks. Suffering burnout, Dashtgard checked out of her life and took the first steps towards personal healing, a journey that continues to this day.

Breaking the Ocean introduces a unique perspective on how racism and systemic discrimination result in emotional scarring and ongoing PTSD. It is a wake-up call to acknowledge our differences, addressing the universal questions of what it means to belong and ultimately what is required to create change in ourselves and in society.

ANNAHID DASHTGARD (M.Ed.) is the co-founder of Anima Leadership, a highly respected international consulting company specializing in issues of diversity and inclusion. Previously she was a leader in the anti-corporate globalization movement, responsible for several national political campaigns and frequently referred to as one of the top activists to watch in the 1990s. She is the host of the podcast series Breaking the Ocean: Soundwaves of Belonging and the director of two award-winning documentaries, Buy-Bye World: The Battle of Seattle and Bread. Her writing has appeared in the Globe and Mail, the Toronto Star, and Briarpatch magazine. Dashtgard lives in Toronto with her husband and children. Breaking the Ocean is her first book.
www.BreakingTheOcean.com
www.AnimaLeadership.com
@Annahid

Excerpt: Breaking the Ocean: A Memoir of Race, Rebellion, and Reconciliation (by (author) Annahid Dashtgard)

It is the beginning of September, the first day of school, and the sun is flirting with making an appearance. Butterflies fill my stomach, but in a good way. Today marks my four-year-old daughter’s first day of attending the “big school” at the end of our street. She’s wearing the robin’s-egg-blue dress I bought for her birthday earlier this year with the silver filigree design down the front — an echo of her Middle Eastern roots. My husband Shakil and I leave the house to drop her off together. With her marching gait, laser-beam gaze, and set mouth, she seems fine. Better off than her mama.

I feel alone. The paralyzing isolation I felt during the early years of motherhood has given way to tenuous new connections with many other parents — through daycare, local Facebook groups, and community gatherings — but I’m still off balance. Despite reaching middle age, despite having achieved professional success, despite all the wonderful things and people in my life, this moment undoes me.

The sight of monkey bars and green playing field makes me feel tight and floaty at the same time. I know it’s because a part of me was left behind in a place just like this, where I learned that in order to survive I had to make myself disappear. I can’t catch my breath. I feel dislocated.

My daughter runs into the play area without a backward glance, and I call her back to give her one last hug. “Enjoy your first day at your new school, Baba. I love you so much,” I whisper. I can’t tell if it’s her or some earlier version of myself that I watch twist and spin away, the past collapsing into the present. All I know is that my daughter’s story begins with my story. And my story begins with my people.