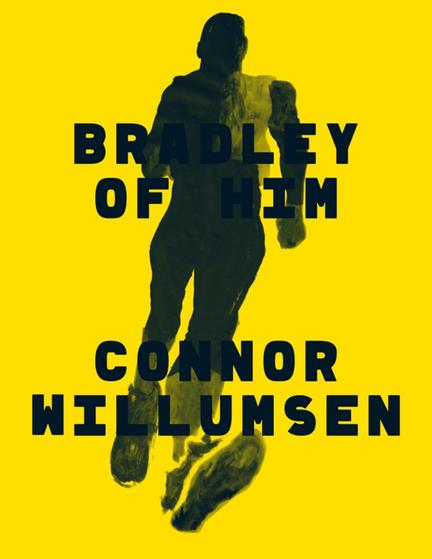 A somewhat familiar method actor prepares for a role as long-runner under the heat and bright lights of a near future Las Vegas. The lines between character and actor are blurring under the verisimilitude of the Vegas strip, the desert sun and the impossibly shiny surface of Bradley’s shades.

Connor Willumsen is a Montreal-based artist originally from Calgary, AB, where he received a design degree at The Alberta College of Art. He began making comics while attending the School of Visual Arts in NYC. Since then, he has drawn stories for Marvel, DC and Dynamite and illustrated the covers for Criterion editions of David Cronenberg’s Scanners and Stanley Kubrick’s The Killing. His Koyama Press debutAnti-Gone was nominated for the 2018 Ignatz Award for Outstanding Graphic Novel.

“The world is a confusing place. A comic about a confusing world should be confusing too.” — Chris Gavaler,PopMatters

“Bradley of Him feels like a new cult classic, an addition to the lexicon of modern outsider storytellers and haunted urban dreamers.” — Arpad Okay,The Comics Beat

“Bradley Of Him plugs right into a moment when the popularity of the middle-brow superhero is pushing into more challenging territory. And in the wake of [Bradley] Cooper’s celebrated directorial turn with A Star Is Born, the comic’s manic, Academy Award-obsessed actor feels ripped from reality.” Jesse Locke,NOW Magazine

“Willumsen has built up a hilarious and philosophically challenging meditation on individuality, capitalism, celebrity, connection — and, under it all, absurdity.” — Etelka Lehoczky,NPR

“Positioning the actor/director/entertainment figure Bradley Cooper as its central figure, Bradley of Him explores a web of shared narratives—awards-season validation,vision quests, career arcs, and mentor-student dynamics among others—which celebrities, more visibly than most of us, struggle to move through. This same pervasive tangle—we’ll call it culture—is just one of the book’s many subjects, and does something wild to us all.” — George Elkind,The Comics Journal

“Bradley of Him, unlike a crushing majority of its medium, takes as its subject matter the kind of stuff we’re constantly inured to treat with import. Celebrities, extreme athletic feats, big-budget entertainment products, and ostentatious leisure combine into a book that manages a legitimate dialogue with the world around it, attempting and succeeding at something most comics abdicate completely.” — Matt Seneca,The Comics Journal

Other titles by Connor Willumsen