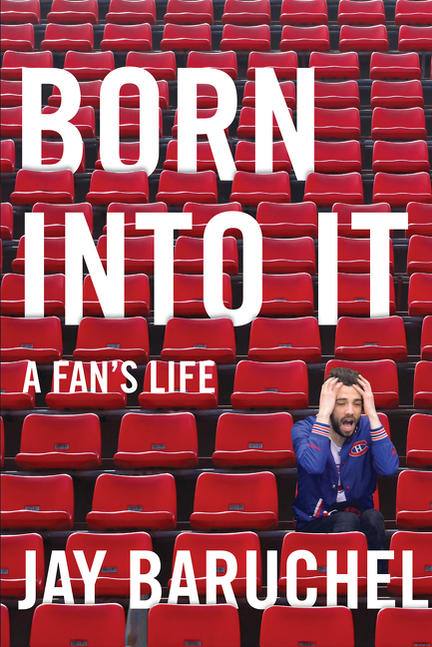 In Fever Pitch meets Anchor Boy, Montreal Canadiens superfan Jay Baruchel tells us why he loves the Habs no matter what

It’s no secret that Jay Baruchel is a die-hard fan of the Montreal Canadiens. He talks about the team at every opportunity, wears their gear proudly in interviews and on the street, appeared in a series of videos promoting the team, and was once named honorary captain by owner Geoff Molson and Habs tough guy Chris Nilan. As he has said publicly, “I was raised both Catholic and Jewish, but really more than anything just a Habs fan.”

In Born Into It, Baruchel’s lifelong memories as a Canadiens’ fan explode on the page in a collection of hilarious, heartfelt and nostalgic stories that draw on his childhood experiences as a homer living in Montreal and the enemy living in the Maple Leaf stronghold of Oshawa, Ontario. Knuckles drawn, and with the rouge, bleu et blanc emblazoned on just about every piece of clothing he owns, Baruchel shares all in the same spirit with which he laid his soul bare in his hugely popular Goon movies. Born Into It is a memoir unlike any other, and a book not to be missed.

Writer, actor, director and comedian JAY BARUCHEL is also part owner and chief creative officer of Chapterhouse Comics. He is best known for his roles in Knocked Up, Tropic Thunder, This Is the End, Almost Famous, Million Dollar Baby and the Goon movie franchise (he wrote both screenplays and directed the sequel). He is the voice of Hiccup Haddock in the How to Train Your Dragon movies and series. Born in Ottawa and raised for the most part in Montreal and later in Oshawa, Baruchel now lives in Toronto, where he continues to cheer for the Habs.

“Born into It is only nominally about hockey; it is as much about the bonds of family and the lure of heroism and the complicated, often contradictory history of the city in which Baruchel spent much of his childhood.”

“Details his lifelong love affair with the hockey team woven into his very heartbeat.”

“Captures the essence of what it means to be emotionally attached to the Habs.”

“Even those who don’t know their Bruins from their Sabres will enjoy this because the writing is really what it’s about. He lived in both Montreal and Toronto so he has stories to tell and Baruchel’s book is top notch.”

“Born Into It is a raw look into the life of true Habs fan. Jay’s passion, love, and loyalty for the Habs is right up there with Geoff Molson’s. A must read for anyone who thinks they’re a Habs fan!”

“A funny, unexpectedly moving memoir that mixes prose, poetry and the occasional hate e-mail to the Boston Bruins.”

“Hockey is so not my thing, but Jay Baruchel took me on punchy, compelling voyage through the mind of a passionate Habs fan who is also a wonderfully creative artist. This is a great read. I actually cared! And I might even start watching Canada’s favourite game.”

Charlotte Gray, author of <em>The Massey Murder: A Maid, Her Master and The Trial That Shocked a Nation</em>

“Dives deep into what it means to be a lifelong fan.”