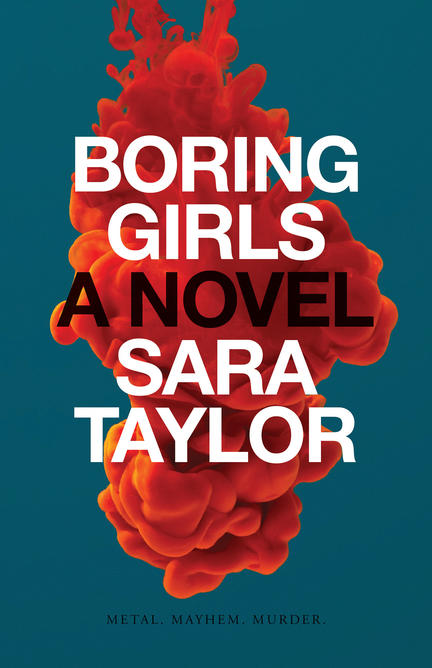 A visceral story of friendship, music, and bloody revenge

Rachel feels like she doesn’t fit in — until she finds heavy metal and meets Fern, a kindred spirit. The two form their own band, but the metal scene turns out to be no different than the misogynist world they want to change. Violent encounters escalate, and the friends decide there’s only one way forward . . .

A bloodstained journey into the dark heart of the music industry, Boring Girls traces Rachel’s deadly coming of age, Fern at her side. As the madness deepens, their band’s success heightens, and their taste for revenge grows ravenous.

Sara Taylor sings and writes songs for the Billboard-charting band The Birthday Massacre. She lives in Toronto, Ontario, with her Shetland sheepdog.

“One of the spring’s most intriguing debut novels, about a pair of female metalheads, begins thusly: ‘It seems like everyone I talk to wants to know two things. One is whether I’m a serial killer or a mass murderer.’” — Globe and Mail

“An incredibly honest, cogent and disturbing portrayal of what it is like to be a woman working in a male-dominated scene and art . . . Boring Girls is a bloody, vulgar, violent book that pulls no punches . . . it’s a harrowing read.” — National Post

“This one is for metal fans, who typically have strong stomachs (they eat lizards, don’t they?).” — Booklist

“A gripping psychological portrait and riveting tale of female friendship and the power of music.” — Publishers Weekly

“One of the season’s most anticipated books, Boring Girls is anything but boring.” — Owen Sound Sun-Times