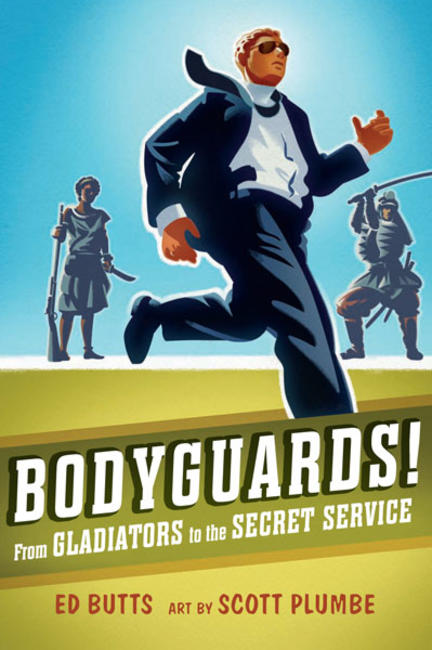 We might think of bodyguards as a modern concept, but they’ve been around since ancient times. The rich, the powerful, the famous, and the infamous have all placed their safety in the hands of bodyguards. From Caesar’s Praetorian Guard to Japanese samurai warriors to Wild West outlaws, bodyguards have played a vital role. They’ve even changed the course of history.

There are notorious bodyguards who protect gangsters from the police and those who are paid to shield celebrities from the paparazzi, while others escort children in danger of being kidnapped. In Bodyguards! you’ll meet both heroes (like the quick-thinking guard whose spear saved the life of Alexander the Great) and villains (like the elite Hitler Bodyguard, later tried as war criminals), and even some bodyguards who have failed in their job to protect.

Brimming with vibrant action-packed illustrations in graphic-novel style, Bodyguards! opens the window on the fascinating stories of those entrusted to protect people’s lives.

Ed Butts loved history and adventure stories as a kid, and started writing short stories, articles, and poetry in his teens. On the rare occasions when a magazine published his work, he was overjoyed, especially when they sent him a cheque for ten dollars. Since then Ed has written books about explorers, adventurers, criminals, hidden treasure, disasters, mysteries, and daring women. He has also worked at many other jobs, including teaching at a school in the Dominican Republic for eight years. Ed lives in Guelph, Ontario, with his daughter and six-year-old grandson.

Scott Plumbe has camped inside an ancient Roman amphitheater, trekked around Mount Kailash in Tibet, and walked to the source of the Ganges River in India. He has traveled in manycountries, including Egypt, Syria, Iran, Morocco, and Japan, which gave him rich experiences to draw on while illustrating the stories in Bodyguards!When he’s not painting at his desk in Vancouver, British Columbia, Scott can often be found with his wife and young son in the local Chinese gardens, or sipping tea and planning their next trip.

“Lively, solidly written, and packed with intrigue and betrayal …”

Other titles by Ed Butts

Other titles by Scott Plumbe

An Illustrated Collection of Fairy Tales for Brave Children