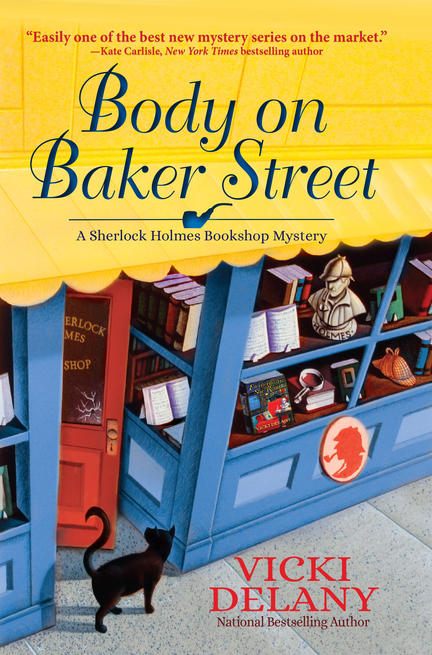 Gemma Doyle and Jayne Wilson are busy managing the Sherlock Holmes Bookshop and Emporium on Baker Street and adjoining Mrs. Hudson’s Tea Room in anticipation of the store’s upcoming book signing with the illustrious Renalta Van Markoff, author of the controversial Hudson and Holmes mystery series. But during the author Q&A session, dedicated Sherlockian Donald Morris verbally attacks Renalta and her series for disgracing Sherlock’s legacy, only to be publicly humiliated when the author triumphantly lashes back and gains the upper hand. That is until Renalta collapses on the table—dead.

Donald insists he didn’t do it and pleads to his friends to clear his name. Fortunately, Gemma and Jayne have no shortage of suspects between author’s bullied personal assistant, her frustrated publicist, the hapless publisher, a handsome rare book dealer, an obsessively rabid fan, and a world of other Sherlock enthusiasts with strong objections to Renalta’s depiction of the Great Detective. It’s up to the shrewd sleuthing duo to eliminate the impossible and deduce the truth before the West London police arrest an innocent man inBody on Baker Street, the second Sherlock Homes Bookshop mystery perfect for fans of Miranda James and Kate Carlisle.

“A twisty plot and an engaging main character. This series will appeal both to cozy readers and to Holmesians.”
—Booklist

“A light-hearted and delightful romp… A perfect novel to read to while away a rainy afternoon with a cup of tea or to keep you company on vacation.”
—Seattle Book Review, five-star review

"Cozy mystery fans will love this one!"
—Suspense Magazine

Praise forElementary, She Read:
"Vicki Delany'sElementary, She Read is an absolute delight. A perplexing mystery with a refreshingly intelligent and witty amateur sleuth, I enjoyed every well-crafted word of this Sherlock Holmes infused tale. A must read for lovers of all things Sherlock Holmes."
—Jenn McKinlay,NYT andUSA Today bestselling author ofBetter Late Than Never

"Vicki Delany is one of my favorite mystery authors and withElementary, She Read, she has outdone herself. This first book in her intriguing new series features Gemma Doyle, a wonderfully appealing protagonist who runs the Sherlock Holmes Bookshop and Emporium, where delightfully quirky characters and fascinating old books flourish. I loved everything about this story! The Cape Cod setting was enchanting and the intricate mystery kept me turning pages late into the night. Easily one of the best new mystery series on the market."
—Kate Carlisle,New York Times bestselling author of the Fixer-Upper mysteries and the Bibliophile mysteries

“Elementary, She Read is a delight, fast, fun, and full of Sherlockian lore. Cheers for a charming, intelligent heroine as observant as The Great Detective himself.”
—Carolyn Hart,New York Times bestselling author ofWalking on My Grave

“Thoroughly delightful. I defy anyone to read this book and not fall in love with the uber-observant Gemma Doyle. She may or may not be related to Sherlock Holmes’ creator, but she’s certainly kin to his most famous detective. The best new cozy series of the year.”
—Laura DiSilverio, bestselling author of the Readaholics Book Club Mysteries and the award-winningThe Reckoning Stones

The holidays are coming, but we've got you covered with amazing book suggestions for all the types on your list.