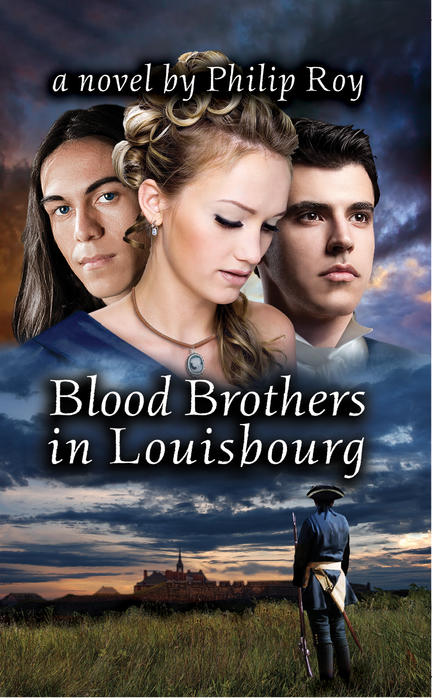 As the son of an officer, Jacques was expected to pursue a career in the military. In the spring of 1744, at the age of fifteen, Jacques and his father leave France for Louisbourg, the French capital of Île Royale, where Jacques is to learn the military arts – a far cry from his books and music and the comforts of his mother’s home. In the Acadian forests that surround the French fortress of Louisbourg, a young Mi’kmaw man named Two-feathers watches the strange comings and goings of soldiers and citizens. Two-feathers is hoping to find his father who, he has been told, is an important man among the French – they have never met. From his discreet camp outside the walls of the fortress, Two-feathers watches, believing that he will know his father when he sees him. At night, he moves silently about the city, including the Governor’s apartments, where he befriends a beautiful young French woman. Jacques’ life in Louisbourg is a curious mixture of military duties and his visits to the Governor’s apartments where he teaches the daughter of a visiting merchant to play the violoncello. The two young men follow very different paths – one formally educated and refined, the other curious and skilful – both seeking to understand their father. Their paths and their worlds collide during the violent siege by British forces in 1745.

Philip Roy continues to travel back and forth between Nova Scotia and Ontario, keeping residence in both places. For some half-dozen years now, he has been presenting orally a series of stories at local schools, fairs, and markets called “Happy the Pocket Mouse.” The first of the series, Mouse Tales, illustrated by Andrea Torrey Balsara, will be released by Ronsdale Press in spring 2014. This series of picture books complements Philip’s “Submarine Outlaw” series for young adults, which is now up to volume six. Recently he travelled to Australia to research the materials for the next book in the series, Eco Warrior, to appear in the fall of 2014. Travelling makes for great adventure, Philip contends. The only thing better is writing about it and visiting schools and libraries to share the stories with young readers. Visit Philip Roy’s website at www.philiproy.ca

My children and I have now read ALL of Philip Roy’s books (often more than once!), and Blood Brothers in Louisbourg, as a work of historical fiction, is definitely a fascinating departure from his Submarine Outlaw adventure series. We had no idea Roy had written this novel until we checked out his website—philiproy.ca. Well, we have always been impressed by his adventure series, but we were really impressed from beginning to end of this novel, especially in terms of how Roy interweaves his plot line so seamlessly with historical accuracy. It was thoughtfully and carefully crafted, and I have to say, this novel really reflects Roy’s versatility, scope, breadth, and depth as a writer. Two-Feathers is one of the most heroic characters we've encountered in YA literature yet. And his half-brother, Jacques, is also quite compelling as a character. Roy's beautifully rendered account of Two-Feathers and Jacques, and their respective struggles, is interesting, insightful, and philosophical. This novel was written with sensitivity and intelligence, and also it offers tremendous insight into what makes us human. When looking at Roy’s considerable repertoire, I would have to say that Blood Brothers in Louisbourg deserves special accolades for its sheer artistry. I would recommend this book to anyone—young or old. It’s a beautiful story, really. My kids would agree.

Reviews on Blood Brothers in Louisbourg

"This is exceptional historical fiction. The writing is intricate and beautifully-crafted. The author delves deeply into the time period, making it come to life for readers. The characters are well-developed, and the book can be understood on many levels. It leaves the reader with much to think about." -Keenreaders.org

"Philip Roy's young adult novel, Blood Brothers in Louisbourg, is a swiftly told, exciting, informative read that will also appeal to older readers….Roy writes economically but with sensitivity and a strong visual sense….[He] has a firm grasp of the history and culture of his setting but, as related by his brace of protagonists, the novel has an immediacy and freshness that never threatens to bog down his story….Roy's novel is remarkably entertaining for any reader, and would make a great read." -What's Going On

"Young readers are treated to a thoughtful, artfully-rendered account of this time in Nova Scotia's history….We see a more balanced and clear-eyed depiction of events and motivations than textbooks are apt to provide. These two young men are engaging and sympathetic characters whose stories are beautifully told….Roy has created a rich and vivid historical drama that readers will undoubtedly enjoy becoming invested in….It is a noteworthy young adult offering that brings our history to life in a way that will capture the imaginations of its readers and invite discussion and further interest." -Atlantic Books Today

Other titles by Philip Roy

The Kingdon of No Worries

Kingdom of No Worries, The