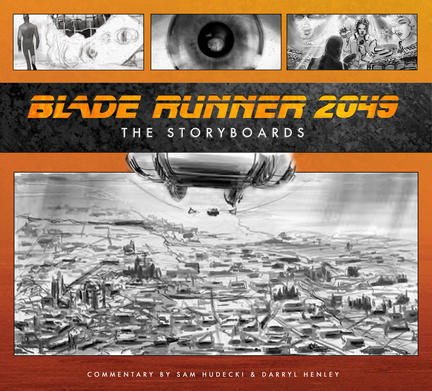 Blade Runner 2049: The Storyboards is the only book presenting all of the storyboards from the film.

In 1982, film audiences experienced a bold new depiction of the future with the ground-breaking Blade Runner, which was fundamental in establishing the still-vibrant Cyberpunk movement. With the critically acclaimed Blade Runner 2049, director Denis Villeneuve further explored that unique "future noir" world, this time following a young blade runner whose discovery of a long-buried secret leads him to track down former blade runner Rick Deckard--the protagonist of the first film--who's been missing for some thirty years.

Blade Runner 2049: The Storyboards is a celebration of the rarely-seen artwork that was key in building the harsh, yet strangely beautiful, environments in the film. This remarkable book presents a fresh look at Blade Runner 2049, including scenes that were later altered or cut out entirely, along with new, in-context commentary from storyboard artists Sam Hudecki and Darryl Henley throughout.

In the middle of training in fine arts, Sam Hudecki made a last-minute shift to study film and has worked in the industry ever since. He’s a great believer in the power of images to tell stories and found a niche in delving into the world of dreams as a storyboard artist and concept designer, lifting the written word into a visual language. Storyboarding and illustration led Sam to working on several Oscar-nominated films such as Prisoners, Sicario, Arrival, Blade Runner 2049, and, most recently, Dune. He lives in Toronto.