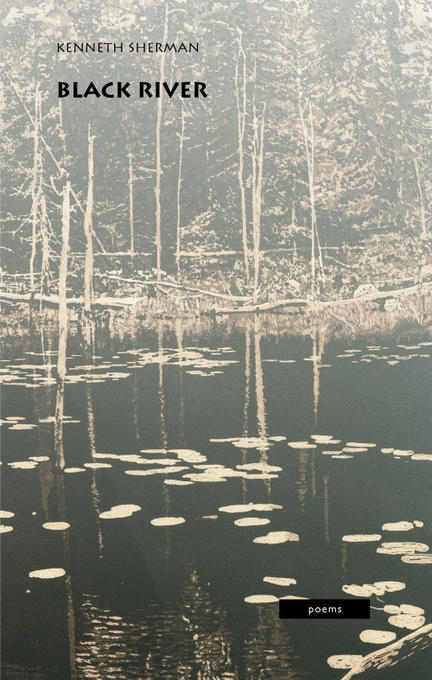 With wit and moral acuity, with language as persuasive as a river's broad current, Kenneth Sherman confronts the anguish of our past and of our present, and offers us 'a harsh contrivance of spirit against death'. Black River is a poetic myth for our time.

Kenneth Sherman was born in Toronto in 1950. He has a BA from York University, where he studied with Eli Mandel and Irving Layton, and an MA in English Literature from the University of Toronto. While a student at York, Sherman co-founded and edited the literary journal Waves. From 1974--1975 he travelled extensively through Asia. He is a full-time faculty member at Sheridan College where he teaches Communications; he also teaches a course in creative writing at the University of Toronto.

In 1982, Sherman was writer-in-residence at Trent University. In 1986 he was invited by the Chinese government to lecture on contemporary Canadian literature at universities and government institutions in Beijing. In 1988, he received a Canada Council grant to travel through Poland and Russia. This experience inspired several of the essays in his book Void and Voice (1998). Sherman, author of the acclaimed Words for Elephant Man, and The Well: New and Selected Poems, lives in Toronto with his wife, Marie, an artist.

'After finishing Kenneth Sherman's new sequence of poems, Black River, (Porcupine's Quill, 2007) I lay back and realised I have been living in the fast lane of prose -- library work, book selling, blogging, book clubbing, periodical reading -- for too long. Reading these poems I found myself rediscovering a natural breath and rhythm, and I was carried along with the poet's evocatively natural, yet nuanced choice of words making ripples upon the surface as he journeyed along the Black River.'

'To have the time to read poetry, or to make the time to read poetry, is important. As Kenneth Sherman says: ''Stop and search beneath life's flux / if you wish to discover your will, / your forbearance.'' (p.55) It is healthy and ultimately life affirming to meditate on the past, our place in the present, and on the ghosts of history that surround us, for we live with ''forgetfulness / and nightmare blood below the surface.'' (p.29) His references to the First Nations people and the Holocaust make us mindful of man's inhumanity to man, and that our surface culture, fast moving and forward looking, is blind, and quick to leave the past behind.

'For those who escape each weekend to the cottage life, this slim volume of poetry would be a good companion. One to make us mindful and much more conscious of our relationship to this land and to those we share it with; If you don't have a cottage, yet know someone who does, order one, it would be an ideal thank you gift for that invitation to visit.

'Like all books issued by Porcupine's Quill, it is a fine papered edition printed and bound with great artistry. The cover and the images in the text are by the Canadian print maker George Raab. The book was readied for the press by Eric Ormsby.'

'The next time you hear it said that Canadians lack a sense of history and identity, an effective response would be to offer a copy of Kenneth Sherman's powerful new poetry collection, Black River. In it, in ways both lyrical and ironic, Sherman addresses the Ontario landscape's colonial and aboriginal history. At the same time, he manages to interweave this public history with private memories of youth and family life spent along the Black River in south central Ontario.'

'In his author photo for Black River, Ken Sherman looks like he's in a snit. What's his problem? His new book is a swift-moving series of 60 short lyrics that chart the ''rippled soundings'' of the eponymous Ontario river. As long poems go, it's a triumph. History-haunted, wise, disquieting, reverent, held together by a dazzling blend of precision and momentum, the sequence practically begs to be read aloud. Nothing in Sherman's 30-year literary career has prepared us (or me, at least) for the power of what he has done here. He should smile a little.'

'Balancing linguistic floaters and sinkers, [Sherman] captures every seasonal mood and nuance above and beneath his river. The volume appears slim because not a word is wasted in the distance between lyric and epic. Black River is opaque and crystalline, a brooding lamentation and a joyous celebration, a myth of flow and flow of myth, fragment and totality, paddle and drift. It is Sherman's most accomplished poem to date.'

'Sherman always seems to be listening to the voice of Canadian soil and landscape at the same time as he is attentive to the great European metaphysical theme of the soul in conflict with the world and time.'

'Sherman's language is pristinely spare and precise. He points out local lore, but also muses on water in general as a metaphor for time's passage and for oblivion. Indeed, it's not only death that haunts him, but the fear of having his work forgotten. Thus there's a slight undertow of resentment in humorous references to ''award-winning poets who can't rhyme a line of verse'' and ''the bland literati.'' For the most part, though, Sherman is high-minded. In one passage, he writes of the ''strata of silt, clay, limestone, shale -- / the hardening rivers beneath the river.'' Similarly, the bedrock of the book consists of layers of history and mythological and literary allusion. It feels like the product of long, deep pondering, and its effect is felt in quiet, spreading ripples.'

'Kenneth Sherman's poetry uniquely balances tragedy and comic irony as it takes for its subject matter such issues as the Holocaust, the decimation of Canada's First Nations, the posturing of politicians and the hubris of literary impresarios. Sherman's untitled verse is a cornucopia of local history, social commentary, and personal reminiscence formulated through a lyrical language that holds as its common anchor a meandering stream near Sutton, Ontario named ''The Black River'' by the original settlers of the area. Fascinating and thoughtful reading, Black River is an accomplished collection that will introduce a skilled poet to an appreciative audience far beyond the borders of geography and time.'

'... the cumulative impression left by this river voyage through time is a haunting one.'

Other titles by Kenneth Sherman

Jogging with the Great Ray Charles

A Memoir of Cancer

What the Furies Bring