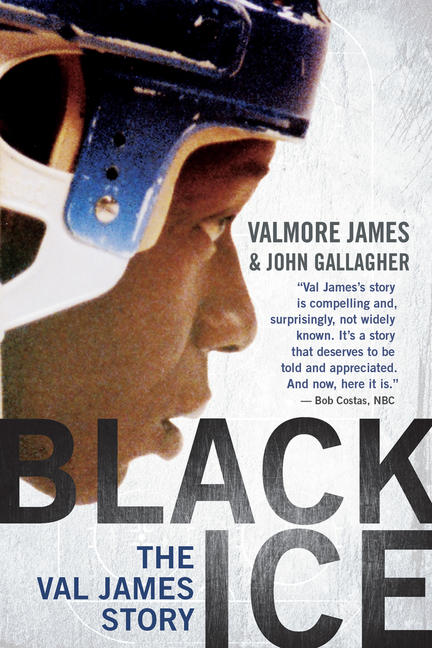 Val James received his first pair of skates for his 13th birthday and by 16, he left his home in New York to play in Canada, where he was the only black person on his junior team and, often, in the whole town. While popular for his tough play and winning personality, the teenager faced racist taunts at opposing arenas. The prejudice he encountered continued at all levels of the game. He became the first African American NHLer when he took to the ice with the Buffalo Sabres in 1982, and in 1987 he was the first black player of any nationality to skate for the Toronto Maple Leafs. In his two NHL stints, James defined himself as a team player known for his pugilistic skills.

As featured in a Fox News Black History Month documentary, on NHL.com, NPR’s Morning Edition, ESPN’s Olbermann, and in Newsday, the L.A. Times, and the New York Times, Black Ice is the untold story of a trail-blazing athlete who endured and overcame discrimination to realize his dreams and become an inspiration for future generations. This edition includes a new afterword that explores James’s legacy.

John Gallagher is an award-winning, thirty-year on-air veteran of Canadian television and radio. He worked for fifteen years at Citytv and is the former host of the country's #1 talk show, Gallagher on TSN. A self-described news and pop culture junkie, foodie, music collector, world traveller, and closet wine expert, John has partied with just about every celebrity of note for the past three decades — and has the pictures to prove it. He lives in Toronto.

“Val James’ story is compelling, and surprisingly, not widely known. It’s a story that deserves to be told and appreciated. And now, here it is.” — Bob Costas, broadcaster for NBC and MLBN

“Black Ice is an engaging read that sheds some important light on the subject of racism in hockey. James is an entertaining narrator, and his story is certainly one worth spending some time with.” — Winnipeg Free Press

“James may have been the first African American to play in the NHL, but that’s just a small part of his fascinating story.” — PuckJunk.com

“Black Ice is gripping from start to finish.” — Scene Magazine

“Black Ice is a fascinating story of an individual who showed tenacity and courage in amassing a lengthy hockey career.” — Sherbrooke Record

Other titles by John Gallagher