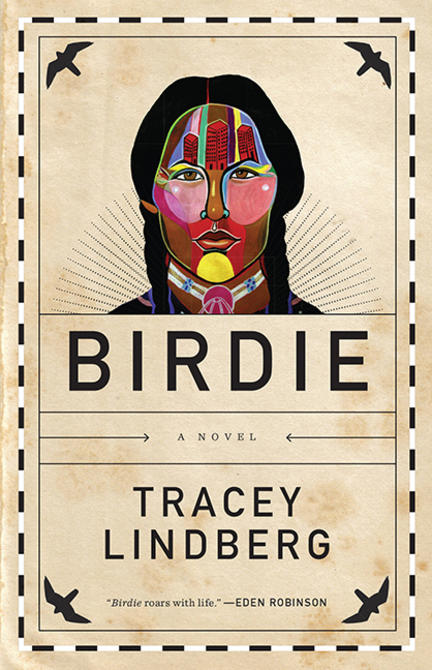 A CBC Writers to Watch 2015 Selection

Finalist for the Georges Bugnet Award for Fiction

Finalist for the Evergreen Award

Bernice Meetoos will not be broken.

A big, beautiful Cree woman with a dark secret in her past, Bernice, known as Birdie, has left her home in northern Alberta to travel to Gibsons, B.C. She is on something of a vision quest, looking for family, for home, for understanding. She is also driven by her lingering teenaged desire to meet Pat John—Jesse from The Beachcombers—because he is, as she says, a working, healthy Indian man. Birdie heads for Molly’s Reach to find answers, but they are not the ones she expected.

With the arrival in Gibsons of her Auntie Val and her cousin Skinny Freda, Birdie begins to draw from her dreams the lessons she was never fully taught in life. Informed by Cree traditions and lore, Birdie is a darkly comic and moving first novel about the near-universal experience of recovering from tragedy. At heart, it is the story of an extraordinary woman who travels to the deepest part of herself to find the strength to face the past and to build a new life.

TRACEY LINDBERG, a woman of Cree-Metis ancestry from northern Alberta, is a professor of law and an Indigenous-rights activist. She has a doctoral degree in law as well as law degrees from the University of Ottawa, Harvard Law School and the University of Saskatchewan. She was awarded the Governor General’s Gold Medal, the most prestigious award given to a doctoral student in humanities (other past recipients include Pierre Elliott Trudeau, Robert Bourassa and Gabrielle Roy). She has been professor of law at the University of Ottawa and is currently at Athabasca University, where she is Chair of the Centre for World Indigenous Knowledge and the Canada Research Chair of Indigenous Traditional Knowledge, Legal Orders and Laws.

Professor Lindberg has published many legally based articles in areas related to Indigenous law and Indigenous women, and she is also a fiction writer, with stories published in a number of literary journals, as well as a blues singer. As she describes herself, she is next in a long line of argumentative Cree women. This is her first novel.

I cried over this story about a young Cree girl, growing up on a northern Alberta reserve, who finds herself as an adult choosing whether or not to survive her childhood. I was afraid it would be too harrowing - the horror of sexual assault - but it wasn't at all. Emotionally engaging, beautifully written (& told in a non-linear story-telling way with dreams, parables) it is uplifting and reflective about the power of life and love, and ultimately redemptive. It was a top choice of Canada Reads 2016 and is a book every Canadian should read.

Other titles by Tracey Lindberg

Spoken and Written Explorations of His Work

The Doctrine of Discovery in the English Colonies

18 novels that pay homage to the contemporary stories, landmarks, events, people, and communities associated with the land and larger community now known …

Jennifer Quist on Edmonton as a Literary City

This is Edmonton writing, and it exists even when there is no traveling cosmopolitan poet standing over our beds. It’s set in streetscapes, not farm-scapes. …