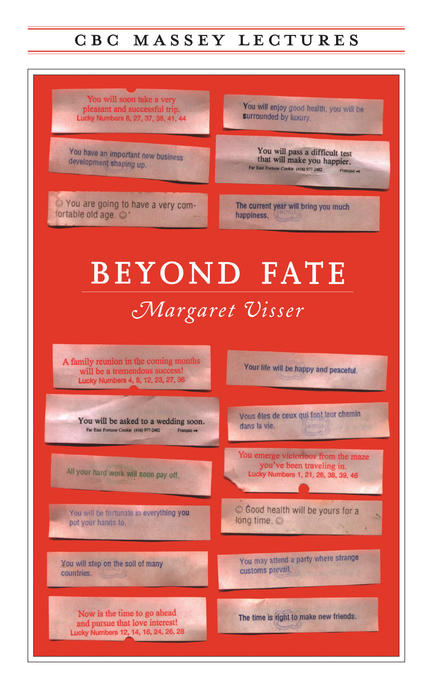 In spite of modern ideals and achievements in the area of freedom and choice, people today are often afflicted with a sense that they cannot change things for the better. They feel helpless, constrained, caught -- in a word, fatalistic. Beyond Fate, Margaret Visser's 2002 CBC Massey Lectures, examines why.

This timely and important book investigates what fate means, and where the propensity to believe in it and accept it comes from. Visser takes an ancient metaphor -- ubiquitous, influential, perhaps unavoidable -- where time is "seen" and spoken of as though it were space; she examines how this way of picturing reality can be a useful tool to think with -- or, on the other hand, may lead us into disastrous misunderstandings. There are ways out. But first, by observing how fatalism manifests itself in our daily lives, in everything from table manners and shopping to sport, we understand our profound attachment to fate, so that we can consider its role in our lives and our cultures.

MARGARET VISSER is an award-winning author and essayist. Her previous five books, all bestsellers, have met with international acclaim. Much Depends On Dinner won the Glenfiddich Prize for Food Book of the Year and was named one of the best books of the year by Publishers Weekly and The New York Times. The Rituals Of Dinner won the IACP Literary Food Writing Award and the Jane Grigson Award, and was named a New York Times Notable Book of the Year. Her most recent book, The Geometry of Love, also the subject of a prize-winning documentary film, was a finalist for the Charles Taylor Prize. A professor of classics at York University for 18 years, she now devotes her time to research and writing. Visser lives in Toronto, Paris and the south of France. Visit her online at www.margaretvisser.com.

Other titles by Margaret Visser

The Rituals Of Dinner

The Origins, Evolution, Eccentricities, and Meaning of Table Manners

The Way We Are

The Gift Of Thanks

The Roots, Persistence, and Paradoxical Meanings of a Social Ritual

Much Depends On Dinner

The Geometry Of Love