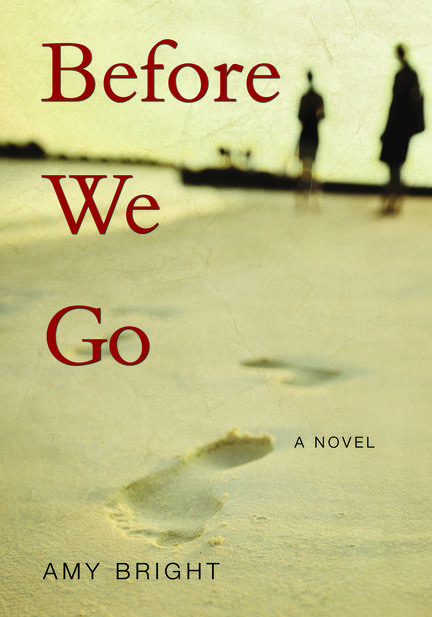 Visiting her dying grandmother in hospital is not what 17 year old Emily wants to be doing for New Year's Eve, but it's not like she has anything else to do. Leaving the hospital, she meets a teen-aged boy named Alex, who is also leaving. When he invites her to go for a burger with him and his sister, she goes along. What Emily doesn't know is that Alex, too, is dying, their meeting is not a coincidence, and she is in for a New Year's Eve unlike any other.
Before We Go is the moving story of three kids propelled toward a surprising future by family secrets that have spanned generations.

Amy Bright is an essayist, short story writer, and blogger who has lived in Alberta, British Columbia, California, and Florida. She currently lives in Lethbridge, Alberta. She received her BA from Mount Allison University, New Brunswick and her MA from the University of Victoria, BC. Her academic work can be found in the Journal of Children’s Literature and Studies in Canadian Literature. Before We Go is Amy’s debut novel.

"Impressively, Bright, a first-time novelist, has crafted a novel whose entire events, character development and storyline take place in less than twelve hours. Despite the short time frame, the pacing of the novel is relatively well set; never at one point did the reader feel rushed. This structured pacing is likely due to the author's adept use at alternating blocks of dialogue with descriptive text. In this way, the reader was privy to both descriptions of the surrounding environment, which allowed for the contextualization of the characters' actions, as well as the teenage vocabulary that permeated the dialogue, allowing for a clearer understanding of their actions and motivations. . .
"Teenage audiences will take a liking to Before We Go, given the age-appropriate dialogue that peppers the book's more than 200 pages. While the read was off to a slow start, the balanced description with dialogue and the absence of a clichï¿½d ending showcased the storyline that was impressively developed within the short time frame of this novel."
Recommended.
— CM Magazine

Visiting her dying grandmother in the hospital is not what Emily had in mind for New Year’s Eve. Leaving the hospital, she meets a guy named Alex and agrees to join him and his sister for burgers. What Emily doesn’t know is that Alex, too, is dying — and their meeting is not coincidental. This New Year’s Eve will be unlike any other Emily has ever had!

Other titles by Amy Bright