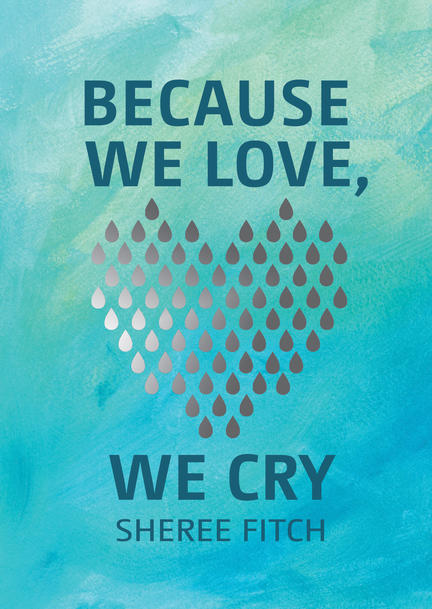 During the global pandemic, Sheree Fitch shared what she calls "moments"—her first-burst warm-up writing exercises, on social media almost every day. Sometimes funny verse, other times lyrical prose or poetry, these daily missives were one way to negotiate the strange, unpredictable times. On April 20, immediately upon waking, as the full story of the tragedy in Portapique, Nova Scotia, was unfolding, Fitch thought of all affected, the painful day ahead, of what parents would say to their children. She thought about grieving when apart.

These words moved through her immediately that day. Fitch shared "Because We Love, We Cry" on social media and it was embraced by Nova Scotians and those who love them across the country. It was read aloud in Canadian Parliament and during a provincial news conference about COVID-19, and by Fitch herself during a nationally broadcast vigil held for the twenty-two victims of the Portapique tragedy.

After many requests, Nimbus and Sheree have come together to make the poem available in book form. Featuring colour line drawings and the full poem on heavy cardstock for safekeeping, as well as a pull-out postcard to send to loved ones near and far, Because We Love is a mantra, a prayer, a lament, a talisman, a paper rosary, a beating heart to keep close to your own.

A portion of the book's proceeds will be donated annually to the Red Cross Stronger Together Nova Scotia Fund, which offers "support to the individuals, families and communities impacted by the Nova Scotia tragedy with immediate and long-term needs."

EveryBody's Different on EveryBody Street