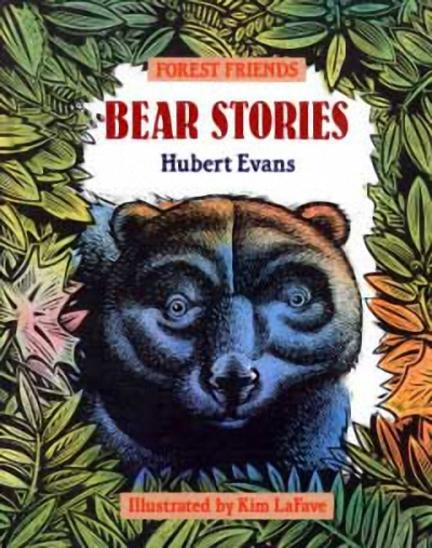 Four true stories of encounters between people and black bears, in which the people learn a bit more than the bears.

Kim La Fave, a Governor General's Award-winning artist, is the illustrator of Amos's Sweater (by Janet Lunn) -- winner of the Ruth Schwartz Children's Book Award and the Amelia Frances Howard-Gibbon Award for illustration -- Follow That Star (by Kenneth Oppel), I Am Small (by Cherrie Fitch), the bestselling The Bones and Skeleton Book (by Steven Cumbaa) and many other children's books. He lives in Roberts Creek, BC.

Hubert Evans was born in Vankleek Hill, Ontario in 1892 and raised in Galt, Ontario. He worked as a reporter before enlisting in 1915. He married in 1920 and built his permanent seaside home at Roberts Creek, BC. His first novel, The New Front Line (1927) is about a pioneering World War One veteran in BC. He and his wife also lived in northern BC Indian villages, resulting in his acclaimed second novel, Mist on the River (1954). His 0 Time in Your Flight (1979), written in his late eighties despite near blindness, recounts a year in the life of an Ontario boy in 1899. Revered by Margaret Laurence as "the elder of our tribe," the Quaker outdoorsman also published two hundred short stories, sixty serials, twelve plays, three juvenile novels, three books of poetry and one biography. Hubert Evans died in 1986, after seven decades of professional writing.

Other titles by Kim La Fave

When the Rain Comes

A First Book About Facts of Life

Other titles by Hubert Evans

The Life of a Sockeye

Son of the Salmon People

O Time in Your Flight