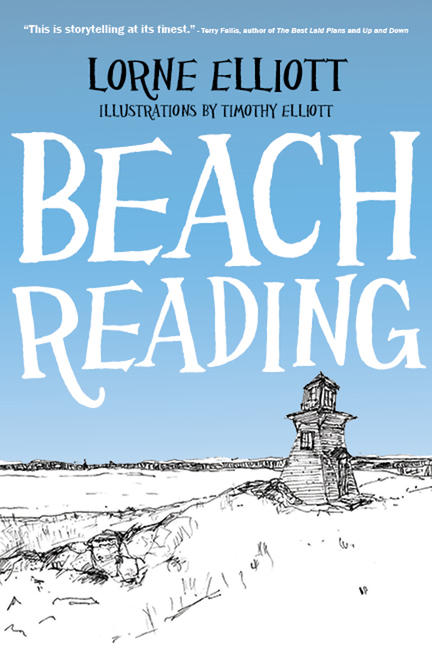 Lorne Elliott’s new novel, Beach Reading, takes us back to the early 1970s on the North Shore of Prince Edward Island, where a hilarious and colourful cast of Lorne Elliott characters are engaged in uproarious political, financial, musical, amorous, and ecological shenanigans. Our young hero, Christian, is an eloquently wry and precocious university drop-out, who has never savoured the wonders of women or alcohol. A budding naturalist raised in central Canada, he arrives on PEI for a summer job in the newly-established Barrisway National Park, and sets up camp on the beach. There, he becomes enmeshed in the struggles of the boisterous MacAkrin siblings to remain in their park-enclosed home, rivalries and lustful longings at park headquarters, and the skullduggeries of an Island political campaign. Lorne Elliott gloriously conjures the mischief and zaniness, the lovable rascals and lamentable rogues, of Island life behind the tourist posters. He deftly evokes the kindness and camaraderie of Islanders, and the Island’s high-spirited revelry. Beach Reading transforms the Land of Anne and Avonlea into the land of Wallace MacAkrin, the Barley Boys, and Barrisway. “Come play on our Island,” as the tourist slogan says, and you’ll be laughing with bittersweet delight for days.

Canadian-born writer, humourist, storyteller, and musician Lorne Elliott started performing in 1972 as a folk musician while attending Memorial University of Newfoundland. He is known for his one-man concert performance, The Lorne Elliott Music and Comedy Show: "The Collected Mistakes,” and for "Madly Off In All Directions," the CBC Radio comedy series which he wrote, hosted, and taped in concerts across Canada. It was greeted with such enthusiastic audience response that it went on for eleven seasons until it wrapped up in fall 2006. Lorne has written several plays including The Night The Racoons Went Berserk, which won the Best New Play Award at the Quebec Drama Festival 1983 and was produced at the Charlottetown Theatre Festival in 1986. Culture Shock has been produced several times and has been filmed by CBC TV. Other plays include The Pelley Papers, A Pitiful Ambition, How I Broke into Showbiz, and Tourist Trap. He has also written screenplays and TV comedies, skits, and revues, and has produced comedy variety shows for CBC TV, including "What Else is On" and "Lorne Elliott's Really Rather Quite Half-Decent TV Special." When not on tour, Lorne divides his time between homes in Quebec and Prince Edward Island.

Timothy Elliott is an artist who lives in Hudson, Quebec

Other titles by Lorne Elliott

The Goat in The Tree

Summer Covers, Had Me a Blast

All right, it's True Confessions time: I'm a sucker for books whose covers scream, "Summer!"