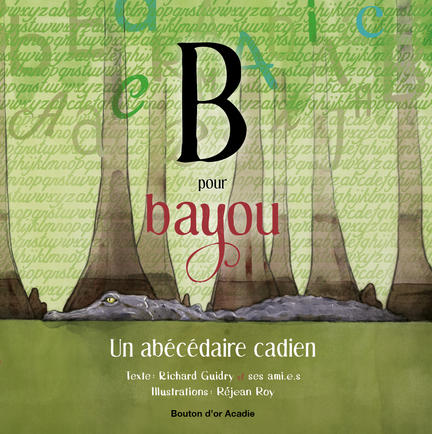 In the heart of the Bayou, where the Cipre trees rise from the swamp, a Cocodrie slumbers. Can you see it, as you perch in your Arbre à poules? In Nénaine's kitchen, the aroma of Débris and Jambalaya fills the air.

B pour bayou [B for bayou] is a cajun ABC in which Richard Guidry (AKA «Le gros Cadien» or «the Big Cajun») and his friends offer up a Gombo-soaked delicacy of words, while illustrator Réjean Roy takes us aboard his Esquif, down the Mississippi.

After Ah! pour Atlantique, we leave the Acadie of the Maritimes for the Cajun Acadia of Louisiana!

"Being around him was like being around a talking dictionary", said Barry Jean Ancelet about his friend and colleague. Richard Guidry was an author, an activist and a major spokesperson for the protection of cajun and creole French, as well as a Professor at the University of Lousiana in Lafayette. He died in 2008, leaving a great void in Cajun and Acadian hearts. B pour bayou [B for Bayou] is inspired by the numerous pedagogical tools he developped, and contains sections signed by his friends, to share the love of language with the youngest among us.

Réjean Roy grew up in Petit-Rocher, New Brunswick. He studied biology in Québec, where he also enrolled in fine arts classes. Aft er spending ten years in Gaspésie and a year in Outaouais, he returned to live in New Brunswick. Drawing has always been a part of his life, and nature his greatest inspiration. Since his beginnings with Bouton d?or Acadie, Réjean Roy has written and illustrated over thirty books. His paintings are coveted by collectors and he is a top notch illustrator.

Other titles by Réjean Roy