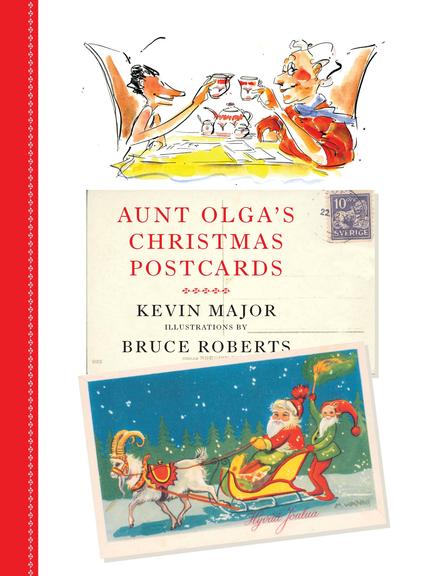 Great-great Aunt Olga has been a collector of Christmas postcards all her life. She's ninety-five, and many of the cards come from very long ago. The Yuletide season is the occasion to share her postcards and her Christmas memories with her favorite niece, Anna. Decked out in red, Aunt Olga is not averse to a little fun over tea, teaching Anna how to write her very own Christmas rhymes.

Delightful whimsical drawings and a warmly humorous text, along with fascinating historical postcards from the author's personal collection, make a wonderful and unique Christmas book, one that just might inspire readers to design and send Christmas postcards of their own.

Bruce Roberts emigrated to Canada from England at the age of five. He is a self-taught artist whose imagination was fueled by E.H. Shepard as well as books about the Wild West. Known in North America and abroad, his vibrant drawing style can be equally whimsical and evocative. He has won numerous awards for illustration, including the Governor General's and Prix d'Odyssee awards for Fideles elephants, an anti-war Japanese children's classic about saving elephants. He lives in Montreal.

[The story] works beautifully, especially for ages six and up, partly because the cards themselves are so charming, and partly because the narrative, both humorous and tender, is based on a strong relationship between a witty old woman and her fiercely loyal great-great-niece.[...]Children as well as adults may be drawn to pore over the lost world depicted in the postcards, their distinctive artistic styles instantly evoking different decades.

Vintage postcards are a beautiful complement to the text...Highly recommended.

A combination of genuine vintage postcards and quirky ink-and-watercolor sketches...grace this bittersweet celebration of intergenerational friendship, Christmas and creativity.

...the nostalgic tone and sweet intergenerational theme will win fans.

...the beautiful story will be a Christmas classic.